A disappearing medical implant from Abbott Labs will get a closer look from the FDA this week. 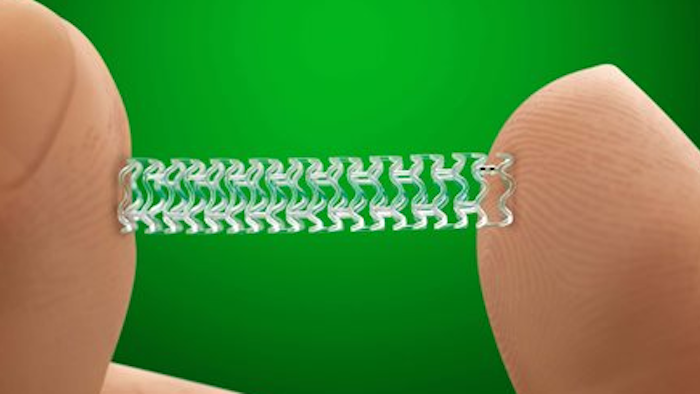 The FDA meets on Tuesday to review Abbott Laboratories' first-of-a-kind heart stent that dissolves into the body after helping to clear fat-clogged arteries.

Abbott has asked the agency to approve its Absorb stent as an alternative to permanent, metal implants that have long been used to treat narrowing arteries that can lead to heart attack and death.

But regulators have questions about the safety and effectiveness of the experimental device. In a review posted late last week, FDA scientists noted that rates of cardiovascular complications were actually slightly higher with Absorb than with older stents tested in a company study. Additionally, complications were more likely to occur when Absorb was implanted into smaller arteries.

The agency will ask a panel of outside advisers to discuss the data and whether the device should be approved.

A positive opinion from the panel, while not binding, would bring Absorb one step closer to the U.S. market, where some 850,000 patients receive heart stents each year.

Stents are tiny, mesh-wire tubes that prop open arteries after they have been cleared of fatty plaque. They have grown into one of the most widely-used medical implants ever, but sales have been tempered by rare, risky complications.

Researchers first added drug-coatings to the devices in 2003 to prevent arteries from becoming reclogged after implantation. But subsequent studies showed that stented arteries could still develop blood clots, potentially triggering heart attack and death. To address that risk, Abbott and other device makers began developing dissolving stents that would slowly melt back into the body like stitches.

The Absorb stent, already sold in Europe, is made of a degradable material that's designed to stay intact and release medicine for a year, then break down over the next two years.

In the company study submitted to FDA, patients who got Absorb fared as well as those receiving Abbott's older metal stent, Xience. However, FDA reviewers noted that the rate of complications was actually slightly higher with Absorb — 7.8 percent of patients, versus 6.1 percent of patients with Xience. While that difference was not statistically significant, the FDA will ask advisers if it has implications for Absorb's safety.

Additionally, FDA reviewers noted that complications appeared to increase when Absorb was placed in smaller blood vessels. That's led Abbott to propose a warning to cardiologists not to use the device in vessels under a certain size, cautioning an increased risk of heart attack and clotting.

The FDA will ask its experts whether that warning is adequate.

Abbott followed patients for a year and measured a cluster of negative outcomes, including heart attack, repeat procedures to clear the artery and heart-related deaths. All patients in the study also received anti-clotting medications to prevent blood clots, standard medical practice for those receiving stents.

Despite negative questions from the FDA, Wells Fargo analyst Lawrence Biegelsen says federal approval is likely. But he doesn't expect Absorb to be a major seller, "given its shortcomings — difficult to use, numerically worse outcomes versus Xience, higher rates of stent thrombosis." He estimates the device will capture just 5 percent of the U.S. market for stents, according to a research note.