Google's Road Trip to Break Out of Silicon Valley Bubble

Google is about to embark on an old-school search, swapping its Internet algorithm for a custom-built van that will cruise across the U.S. to find out how people use its online services and react to new features. 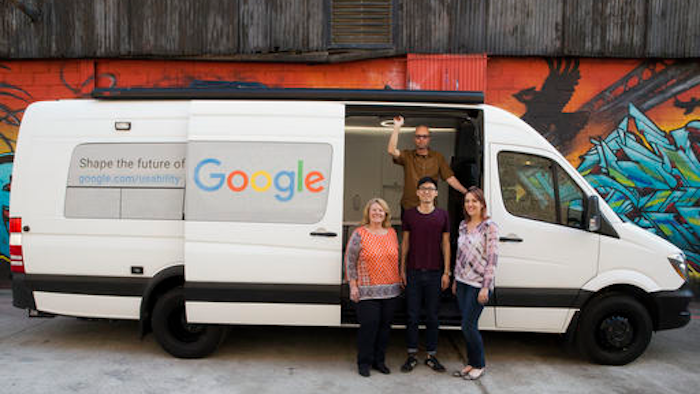 The white van emblazoned with Google's colorful logo and an invitation to "shape the future" of the world's most powerful Internet company is scheduled to pull out Monday on a six-week road trip.

Google is using the van to help it break out of its Silicon Valley bubble. The van will make multiday stops in seven states, stopping near colleges, libraries, parks and some of Google's own regional offices in hopes of finding out how average Americans are using the company's multitude of digital offerings.

About 500 walk-up volunteers will be invited to step inside the van designed to serve as a mini-version of Google's Silicon Valley laboratories, where most of the company's user studies are conducted.

Once inside, researchers will watch, question and record how the volunteers use apps and other services on their smartphones in sessions that will last 15 to 90 minutes. They will receive gift cards and Google t-shirts in return for their time.

A few may even get a glimpse at ideas that Google's engineers are still refining before the company decides whether to release them as products to the general public.

The plan to build a research lab on wheels grew out of Google's recognition that most people don't live and think the same way as the population living in the San Francisco Bay Area, where the company does most of its user research.

In this geeky and affluent area, the day's biggest worry sometimes boils down to how long it will take to summon an Uber ride to a fancy restaurant.

"We are trying to understand the whole end-to-end experience, which is why we are trying to get out to more locations and see more people so we can gather more context," says Laura Granka, a lead Google researcher focusing on Internet search and maps.

Traveling the country in search of more diverse opinions makes sense to San Diego State University marketing professor Steven Osinski, although he suspects the van's road trip is more of a goodwill tour than a data-gathering expedition.

"I don't know how much more they are going to learn that they are not aware of right now," Osinski says. "With just one van, whatever data they get is likely to be very anecdotal. It will be a good public-relations story, but it doesn't really strike me as a real game changer in terms of research."

Granka, however, says Google's marketing department didn't have any involvement with the upcoming tour.

"It is purely driven by research and our desire to reach and understand more of our users," she said.

The journey marks another step in Google's evolution from a freewheeling company that routinely introduced services with a "beta" tag to signify they hadn't been thoroughly tested.

Now, Google is taking a more deliberate approach that relies on more extensive research before its products hit the market.

In another sign of its transformation, Google last year folded itself into Alphabet Inc., a holding company that oversees many of the experimental projects, or "moonshots," that formerly came out of Google.

If the trip yields helpful insights, Google plans to send the van on several shorter junkets to cities across the country later this year and may eventually hit the road in other countries.