Timelooper Virtual Reality Takes You Back in History

Imagine watching frantic shopkeepers extinguish the Great Fire of London, or take shelter from Nazi bombing raids during the Blitz. 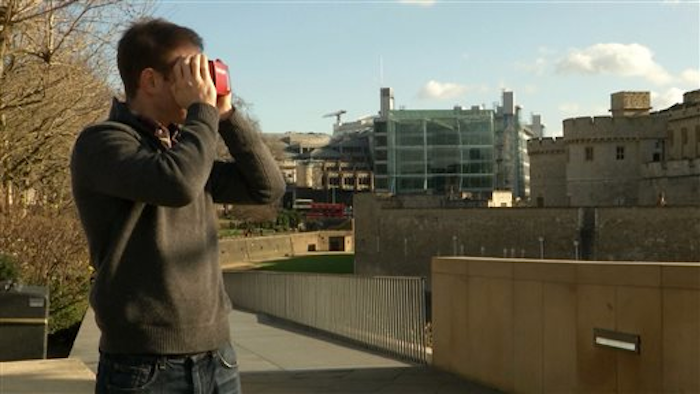 This Feb. 2, 2016 image made from video shows Timelooper co-founder Andrew Feinberg looking through a Google cardboard virtual reality headset across from the Tower of London in London, England. The Timelooper app allows users to experience key moments in London history with just a smartphone and a cardboard headset.
AP Photo

Now, thanks to a new virtual reality app, you can travel back in time to be immersed in these events.

The Timelooper app allows users to experience key moments in London history with just a smartphone and a cardboard headset.

For example, when Timelooper cofounder Andrew Feinberg visits the Tower of London, a historic castle on the banks of London's Thames River, he doesn't queue up with hordes of tourists to catch a glimpse of the royal family's crown jewels. Instead, he uses Timelooper's time travel tourism app to experience the tower over 750 years ago, in 1255.

Instead of seeing a busy London tourist site, Feinberg sees a medieval marketplace, a formidable fortress, even an elephant being led down a path.

"We actually overlay the current infrastructure with what the infrastructure of the tower and the surrounding environment was like in 13th century London," explained Feinberg. "So for example, now you see a Starbucks and now you see the tower as it looks today with the moat drained. When we take you back in time, you actually see the historically accurate representation of the tower in its heyday."

Not far away at St. Paul's Cathedral, Timelooper users travel back to the Great Fire of London 350 years ago, in 1666. The fire burned for four days, destroying over 13,000 houses.

The smartphone's built-in motion detection allows time travelers wearing a cardboard headset to move their gaze around the virtual world, seemingly exploring London centuries ago. The videos are location-based, meaning visitors must visit the sites to unlock the historical experiences.

Feinberg and his cofounder, Yigit Yigiter, were frustrated with current tourism technology, which they say hasn't evolved much since the introduction of audio guides. In 2014, Yigiter's wife brought home a Google cardboard VR headset, and he began thinking about an immersive virtual reality tourism experience. By September 2015, he'd quit his job in private equity and moved to the British capital to begin work on the first incarnation of the app. The first version was launched in July 2015 and featured three sites.

While Timelooper uses VR to offer a unique historical perspective, the technology has been exploding in many directions throughout the tourism industry.

Carnival Cruise Line uses it to market cruises, the Dollywood theme park in Tennessee uses it to show off a new rollercoaster, and the Seattle Space Needle uses it to help visitors appreciate the view from its sky-high observatory.

The Dali Museum in Florida created a virtual reality experience that lets visitors walk through a landscape painting by the Surrealist master Salvador Dali. And a company called YouVisit has created over 300 VR experiences for destinations from Vatican City to Mexico.

Timelooper is a member of the Travel Tech Lab, an incubator space for travel technology start-ups, partly created by London & Partners, the city's official promotional company. Following the launch last year, Feinberg and Yigiter were contacted by destinations from China to Spain.

"Nothing replaces the experience of being on site, but you don't always know what the stories are about those sights," Yigiter said.

Timelooper's travel app is also used by those working in London's booming tourism industry. Blue Badge tourist guide Ruth Polling pulls her cardboard headset out as she escorts visitors to Trafalgar Square and lets them see what happened on Sept. 23, 1940, when a bomb dropped by Nazi Germany exploded near Nelson's Column, a famous landmark and iconic part of the victory celebrations held five years later to mark the end of the war in Europe.

"My job is a storyteller," Polling said. "I'm here to conjure up what things are like and this just gives me something else I can use, particularly with small children, getting them really engaged."

London landmarks are also finding Timelooper's VR experience useful in giving a new-age twist to a decades-old attraction. The Thames River's 120-year-old Tower Bridge is set to launch its own Timelooper experience in April, taking visitors back to 1666, before the bridge was even built. Instead, headset wearers view the raging Great Fire of London from a boat's crow's nest as it sails down the river.

"When you're here at the bridge, you are told a story of how things were but you can't physically see that," says Chris Earlie, the head of Tower Bridge. The app also helps immerse international visitors into the story without "translating endless amount of text."

Timelooper plans to launch in New York City this April, allowing tourists to witness the famous kiss that was photographed in Times Square in August 1945 on VJ Day, the day World War II officially ended with the surrender of Japan, and to see the iconic picture of workers eating lunch atop a skyscraper during construction of the Rockefeller Center in 1932.