The device acts like an external skeleton. It straps in tightly around the torso. Rigid supports are strapped to the legs and extend from the hip to the knee and from the knee to the foot. 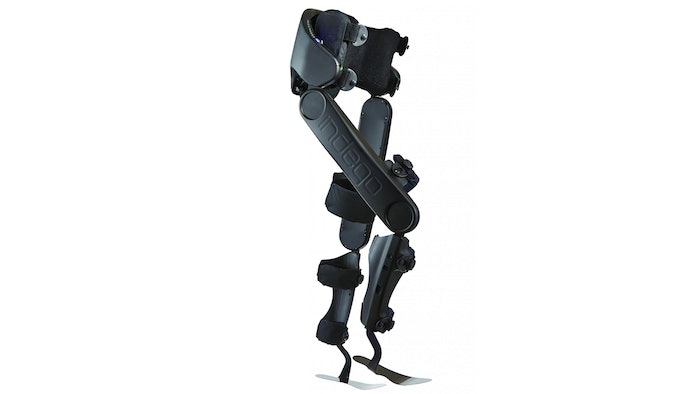 This is an Indego powered exoskeleton.
Parker Hannifin

The U.S. Food and Drug Administration (FDA) has given clearance to market and sell the powered lower-limb exoskeleton created by a team of Vanderbilt engineers and commercialized by the Parker Hannifin Corporation for both clinical and personal use in the United States.

"I'm really glad," said H. Fort Flowers Professor of Mechanical Engineering Michael Goldfarb who developed the exoskeleton with a team of engineers and students in his Center for Intelligent Mechatronics. "It is particularly gratifying because it is the first thing that has come out of my lab that has become a product that people can purchase, which hopefully will make a significant improvement in their quality of life."

Indego, which allows people paralyzed below the waist to stand up and walk, is the result of an intensive, 10-year effort. The initial development was funded by a grant from the National Institute of Child Health and Human Development.

In 2012 Parker, a global leader in motion and control technologies, purchased an exclusive license to market the design and has worked closely with Goldfarb's group to develop a commercial version of the medical device.

"Parker has done an excellent job in running their leg of the relay race, bringing the exoskeleton to market in just three years," said Goldfarb.

Until recently "wearable robots" like Indego were the stuff of science fiction. In the last 15 years, however, advances in robotics, microelectronics, battery and electric motor technologies have made it practical to develop them to aid people with stroke and spinal cord injuries.

The device acts like an external skeleton. It straps in tightly around the torso. Rigid supports are strapped to the legs and extend from the hip to the knee and from the knee to the foot.

The hip and knee joints are driven by computer-controlled electric motors powered by advanced batteries. Patients use the powered apparatus with walkers or forearm crutches to maintain their balance.

Indego is the second exoskeleton to receive FDA certification for U.S. use. The first was a device produced by Rewalk Robotics Ltd.

However, Indego's clearance came after completion of the largest exoskeleton clinical trail conducted in the United States.

According to the Parker news release, "Over the course of more than 1,200 individual sessions, study participants were able to use Indego to safely walk on a variety of indoor and outdoor surfaces and settings with no serious adverse events."

One of Goldfarb's design goals was to give users the maximum amount of personal freedom possible. One of his requirements, for example, was to allow the user to put the exoskeleton on and take it off while sitting in a wheelchair. As a result, the Indego is considerably lighter and less bulky than the other exoskeletons under development.

Indego also has two features that are specifically designed to aid in rehabilitation:

The innovative nature of the Indego design led Popular Mechanics to name Goldfarb one of its "Ten Innovators Who Changed The World" in 2013.

Beginning this summer, Goldfarb will head a four-year U.S. Department of Defense-funded study of the tangible economic and rehabilitation benefits of exoskeletons for people with spinal cord injuries.

This will be performed at three medical centers: James Haley Veteran's Hospital in Tampa (the first VA center in the country to use Indego), the Mayo Clinic in Rochester, Minnesota and the Vanderbilt University Medical Center.

People who use wheelchairs regularly can develop serious problems with their urinary, respiratory, cardiovascular and digestive systems, as well as getting osteoporosis, pressure sores, blood clots and other afflictions associated with lack of mobility.

The risk for developing these conditions can be reduced considerably by regularly standing, moving and exercising their lower limbs. The study, which will involve 24 participants, is designed to determine whether regular use of the Indego will also reduce these conditions.

Indego has been available in Europe since November, when it received the CE Mark, the European Union's equivalent of FDA approval. The initial price is $80,000.

The next step is getting the device approved for health insurance reimbursement. This involves getting the Centers for Medicare and Medicaid Services (CMS) to approve a "rate code" for the exoskeleton: a numeric code that identifies the characteristics of patients who Medicare/Medicaid will reimburse for purchasing a given piece of medical equipment.

Typically, the government will reimburse 80 percent of the cost of approved medical devices. In most cases private health insurance providers adopt the CMS code.