The design is a hybrid of a kite and a wind turbine.

Kaoru Natori
The Quantum Wave Microscopy Unit conducted a towing experiment at sea to test the prototype of the ocean-current turbine.
Elsevier Ltd.

Fossil fuels propelled the Industrial Revolution and subsequent technological advances. However, our future cannot be based on them, if only because they are a finite resource; and we are very close to exhausting them.

Solar and wind power is often seen as the main locomotive of the energy revolution. However, it is becoming increasingly clear that solar panels and wind turbines alone cannot provide all the energy we need, especially considering that energy consumption around the world is steadily growing.

Ocean currents are another source of power, comparable to fossil fuels in terms of consistency and reliability, and at the same time, clean and renewable.

In the journal, Renewable Energy, the Quantum Wave Microscopy Unit at Okinawa Institute of Science and Technology Graduate University (OIST) proposed a design for a submerged marine turbine to harness the energy of the Kuroshio Current, flowing along the Japanese coast.

This design is especially suitable for regions regularly devastated by storms and typhoons, such as Japan, Taiwan, and the Philippines. The turbine operates in the middle layer of the current, 100 m below the surface, where the waters flow calmly and steadily, even during strong storms.

"Our design is simple, reliable, and power-efficient", says Dr Katsutoshi Shirasawa, a staff scientist in the Quantum Wave Microscopy Unit. The turbine comprises a float, a counterweight, a nacelle to house electricity-generating components, and three blades.

Minimizing the number of components is essential for easy maintenance, low cost, and a low failure rate.

The OIST design is a hybrid of a kite and a wind turbine: an ocean-current turbine is anchored to seabed with a line and floats in the current while water rotates its three blades. Ocean currents are rather slow, averaging 1-1.5 m/s. However, water is over 800 times as dense as air, and even a slow current contains energy comparable to a strong wind. Additionally, currents do not stop or change direction.

The OIST team, led by Prof. Tsumoru Shintake, head of the Quantum Wave Microscopy Unit, built a prototype turbine and conducted various experiments to test its design and configuration. Results confirmed the robustness and stability of the turbine construction. The achieved efficiency is comparable to that of commercial wind turbines.

The design can easily be scaled up or down, depending on local conditions and needs. Dr. Shirasawa and his colleagues aspire to build an energy farm featuring 300 turbines 80 m in diameter. The expected output is about 1 GW -- the equivalent of one nuclear reactor, capable of powering over 400,000 homes. This project will be an important step toward development of green energy. 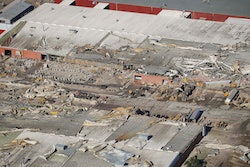 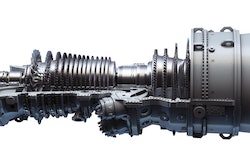