Nothing but 1¼-inch glass separates riders from the ground, promising to provide both a thrill and quite the view for anyone willing to open their eyes along the way. 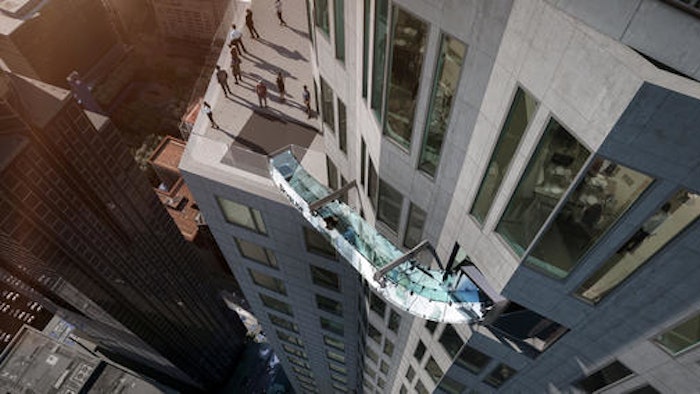 This undated artist's rendering provided by Overseas Union Enterprise Limited shows a glass slide 1,000 feet above the ground off the side of the U.S. Bank Tower in downtown Los Angeles.
Michael Ludvik/OUE Ltd. via AP

Thrill-seekers looking to take their fear of heights to a new level can come to downtown Los Angeles this summer and careen down a clear glass slide atop the tallest building west of the Mississippi.

The "Skyslide" is scheduled to begin sending urban adventurers down the relatively brief ride 1,000 feet above the ground in June. It will span 45 feet from the 70th to the 69th floor of the U.S. Bank Tower downtown.

Nothing but 1¼-inch glass separates riders from the ground, promising to provide both a thrill and quite the view for anyone willing to open their eyes along the way.

On a clear day, the 72-story tower provides panoramic views that extend to Catalina Island 22 miles off the Pacific Coast and over the Santa Monica Mountains to the city's sprawling San Fernando Valley.

"There will be nothing like it in the U.S.," said Lucy Rumantir, head of U.S. operations for the building owner OUE Limited of Singapore.

And that is just the reason for building a giant slide in the sky, Rumantir said.

"When you do something new in LA you've got to be creative," she said, adding there are already plenty of things to see here. But the building owners' thinking goes that a wild slide through the sky might drive more thrill-seekers downtown rather than to the beaches, Disneyland and other traditional attractions.

Downtown nightlife has exploded in recent years with the addition of upscale hotels, The Broad museum, the LA Live entertainment district and trendy bars and restaurants.

Skyslide also continues a trend of creating attractions designed for urban thrill-seekers who for some reason seem eager to laugh in the face of acrophobia.

Grand Canyon Skywalk, the horseshoe-shaped bridge that opened nine years ago, allows visitors to stroll right off the edge of the canyon's north rim and stare through 2,000 feet of nothingness to the canyon floor. The Las Vegas Strip's X-Scream roller-coaster sends riders on a wild plunge off the top of the 1,100-foot Stratosphere Hotel and Casino.

Skyslide is part of a $50 million renovation that will also put an open-air observation deck and bar on the tower's top floors.

Admission to the Skyspace observation deck will be $25, with tickets to Skyslide costing $8.

Tickets go on sale March 18, and Rumantir said the building is already receiving hundreds of calls from people who want to slide.

Asked if she'll actually slide down the thing when it opens, she laughed:.

"Oh yeah, of course. We're going to be the ones who actually test the whole thing before it goes public. The risk is on us."