A building at 432 Park Avenue is reflected in another skyscraper in Manhattan, New York, Thursday, Feb. 18, 2016. The last few years have seen the rise of the supertall, a building standing more than 300 meters high. New technologies have allowed the buildings to have footprints no more than the width of a brownstone or two, a far cry from the massive city block an older building like the Empire State Building requires.
AP Photo/Seth Wenig

Changes in building technology and materials in recent years have made it possible to build slender towers that are among the tallest in the world. And some of these cloud-puncturing beanstalks are poised to transform the city's iconic skyline.

So far, the thinnest of all is the recently completed apartment tower at 432 Park Ave. The stark white pillar, just south of Central Park, is 1,396 feet tall, but each side is only about 93 feet wide.

That's higher than the Empire State Building, but only as wide as the length of a basketball court.

Plans are in place for another tower just a few blocks away that could be the skinniest skyscraper in the world. The tower, at 111 W. 57th St., would be about 1,400 feet tall and under 60 feet wide.

Those tiny footprints are a sharp departure from supertall skyscrapers of the past. The base of the Empire State Building, for example, occupies an entire city block.

"It's a combination of advancements that allows us to build," said Ahmad Rahimian, USA Director of Building Structures at WSP Parsons Brinckerhoff, an engineering firm that's worked on these kinds of projects.

He pointed to high-strength steel and concrete, unavailable a couple of decades ago, which can support higher levels of stress; advances in computing that allows for better modeling and building simulations; and advancements in damping devices, like weights, springs and pendulums which counteract swinging. Damping systems are used in supertall buildings to help control how the structures move with the wind to make it more comfortable for the people inside.

Better engineering alone isn't driving the race for thinner towers. In New York City, these days, there is very little land available for building. Buying up a whole block for a huge skyscraper could be prohibitively expensive.

"This is pretty unique to what's happening in New York right now," said Antony Wood, executive director of the Council on Tall Buildings and Urban Habitat, a group that studies and promotes tall buildings.

By CTBUH's count, there are now 101 supertall skyscrapers standing in the world, with 51 of them built just in the last five years. It counts a building as meeting the definition if it is over 300 meters tall, or around 984 feet.

By 2020, another eight supertalls are slated to be completed in New York City, some office buildings and some residential. At least another 10 have been proposed, including the first one outside of Manhattan. That would be a 73-story building in downtown Brooklyn, which at its current planned height of just over 1,000 feet would dwarf every other building in the borough.

Prices in these buildings are expected to be as sky-high as the views. A three-bedroom apartment at 432 Park Ave. is currently listing for $17.75 million. A penthouse is listed for $75.5 million.

Not everyone's thrilled at the new additions to the skyline. Some say the public should have some input in how these buildings can be built, and that the city should look into whether the zoning codes that allow for them should be revised.

"It's not just one supertall," said Gina Pollara, president of the Municipal Art Society of New York. "What does that mean to the streetscape? How much shadow will there be, how much sunlight will there be? There are the kinds of issues that aren't being discussed."

Carl Weisbrod, chairman of the city's planning commission, wasn't available to discuss the supertalls. In comments to the Council on Tall Buildings and Urban Habitat, he acknowledged there was both pride in the skyline and fear that putting up taller buildings would impact sunlight and the possibility that some landmark skyscrapers could be overshadowed, and "it is our responsibility in government to strike the right balance." 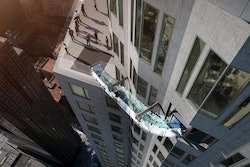