Seventy-five U.S. scientists from 14 institutions have been involved in creating Belle II. 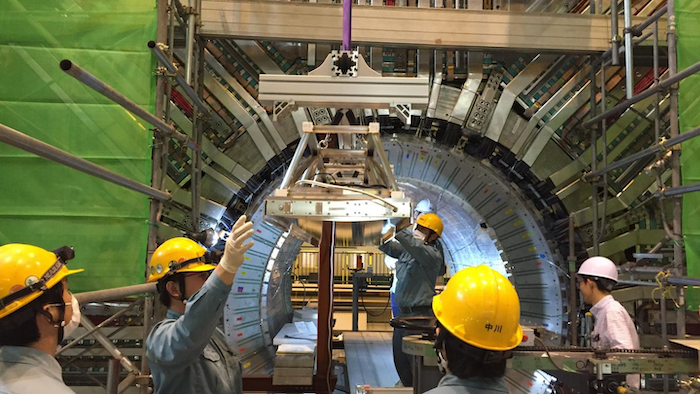 Scientists and technicians insert one of the optical components of the iTOP detector into the Belle II detector. The Belle II detector weighs about 1,400 tons and is approximately 26 feet high, wide and deep. The detector will catch the action when positrons and electrons collide in the SuperKEKB accelerator.
James Fast/PNNL

One of the world's top particle accelerators has reached a milestone, achieving its "first turns" - circulating beams of particles for the first time - and opening a new window into the universe, a view that will give physicists access to a record rate of particle collisions in a tiny volume in space.

Japan's SuperKEKB accelerator fills a unique role in the pantheon of atom smashers worldwide. It's at the forefront of what physicists call the "intensity frontier," designed to deliver more than 40 times the rate of collisions between particles than its predecessor.

Studying the particles produced in these collisions will give physicists a clearer view of the fundamental building blocks of the universe and provide new opportunities to explore physics that goes beyond today's standard model of particle physics.

Last month, on Feb. 10, scientists at the accelerator circulated a beam of positrons moving close to the speed of light through a narrow tube around the 3-kilometer circumference of its main ring 10 meters underground. This past week, on Feb. 26, scientists there succeeded in circulating a beam of electrons moving near the speed of light in the opposite direction. The two events mark the device's "first turns" - a milestone when beams of particles are circulated through many revolutions of an accelerator for the first time.

Next year, SuperKEKB will accelerate the two beams simultaneously, compress them into a smaller area than any other accelerator on Earth, then smash them together to produce copious quantities of B mesons and tau leptons - heavy particles whose decays can reveal new physics. Scientists who have spent years designing the collider and its detectors will then spend years sifting through the scientific fruits of their efforts.

The upgraded collider, located at the KEK laboratory in Tsukuba, Japan, was designed and created by a team of Japanese accelerator physicists. The Belle II detector that will observe the particles created in the collisions has been designed by a team of more than 600 scientists spanning 99 institutions in 23 countries across four continents.

Seventy-five U.S. scientists from 14 institutions have been involved in creating Belle II. The U.S. Department of Energy Office of Science has funded the nation's contribution, and the department's Pacific Northwest National Laboratory has led the effort. Jim Fast of PNNL is the project manager leading the U.S. contribution along with David Asner, the chief scientist for the project. Professor Tom Browder of the University of Hawaii is the spokesperson for the overall Belle II collaboration.

"Global cooperation is necessary to address the most compelling questions in particle physics," said James Siegrist, associate director of science for high energy physics in the DOE Office of Science. "Now nations must specialize in the facilities that they build and provide access to those facilities to physicists from around the world. We appreciate that Japan is hosting this world-class facility where U.S. physicists will study rare particle interactions and look for new physics while in return contributing new state-of-the-art components to the international Belle II collaboration's detector."

At SuperKEKB, rings of magnets accelerate electrons in one direction and their anti-matter equivalent, positrons, in the opposite direction. Each stream of particles is amazingly slim, about one-thousandth the width of a human hair.

Studying the interactions - which particles are created and what happens to them - gives scientists an unparalleled look at some of the fundamental building blocks of the universe and the forces that bind them together. SuperKEKB is one of only a handful of places on the planet where scientists can seek answers to some of the most fundamental questions about our universe. Within particle accelerators like SuperKEKB and others, scientists create particles on earth not seen naturally in the universe since the first moments of the Big Bang.

The collider is designed to explore "new physics" that goes beyond what scientists call the Standard Model of Particle Physics. That model has held up under four decades of scrutiny, but there are questions that continue to vex physicists. For one: according to the Big Bang theory, matter and antimatter were created in equal amounts at the start of the universe and they should have annihilated each other totally in the first second or so of the universe's existence. The cosmos should be full of light and little else. What subtle difference in the physics of matter and anti-matter has left the universe with a surplus of matter - the stars we see, the planet we live on, and ourselves?

Belle II and SuperKEKB are designed to tease out the answers with finesse. SuperKEKB will have the world's highest intensity of any accelerator, 40 times greater than its KEK predecessor. That means the collider will create more collisions of interest than any other collider on the planet.

To create such high intensity, scientists begin by creating beams of electrons and positrons and keeping them tightly corralled with more than 1,000 magnets as they zip around the accelerator 100,000 times per second. The particles are eventually focused into "nano beams" - beams so compressed that when they slam together, the particles within are much more likely to collide. The volume of collisions will allow scientists to study very rare events with unprecedented precision.

To observe the interaction, scientists will turn to the Belle II detector. A digital "camera" the size of a large house, the sophisticated detector encompasses thousands of tons of the highest-tech materials and electronics available. The detector will record data from 30,000 collisions per second, all happening in a region just 100 nanometers high, smaller than a barely visible dot of text. Scientists estimate that the experiment will result in one of the largest scientific samples of data ever, at least a few hundred petabytes - more than all the written works in the history of the world, several times over.

An iTOP to Ferret Out Kaons, Pions

The centerpiece of the U.S. contribution to Belle II is the "imaging Time Of Propagation" detector, also called the iTOP detector. The iTOP will help scientists determine exactly what particles are created during collisions by analyzing the light emitted by particles as they traverse slabs of quartz. That will allow the team to distinguish between particles known as pions, made of up and down quarks, and kaons, made of a strange quark with an up or down quark.

"Previous unexplained measurements have indicated there are some holes in the standard model. The purpose of Belle II is to help us understand new physics beyond the standard model. Our approach is to focus on very rare decay processes with great precision to seek answers," said PNNL's Fast, who manages the construction of the iTOP for the Belle II collaboration.

SuperKEKB is known as a "B factory" because it will produce particles known as B mesons, which quickly decay into other particles. Over the next seven years, scientists expect the collider to produce more than 200 billion B mesons. The collisions will also routinely create particles known as tau leptons, which are highly prized by particle physicists. Sorting through the data and isolating the interactions of interest - extremely rare events - provides a peek into the fundamental laws of nature.

With the upgrade, researchers estimate they will see about 40 times as many "collisions of interest" as they did before the upgrade.

PNNL has worked closely with KEK researchers for several years. Since the Fukushima disaster in 2011, PNNL has helped manage the immense amount of data related to the project for collaborators around the world. About two dozen scientists at PNNL have contributed to Belle II, about half in work directly related to building the detector and the other half helping manage the data.

UAE to Launch Spacecraft to Moon in 2024

How the polio vaccine went from the lab to the public — and what Americans can learn from it today.
Sep 29th, 2020

The company has ambitions to use the technology in offices and stadiums.
Sep 29th, 2020

What have human studies shown? And what side effects have been observed?
Sep 28th, 2020

Future moon explorers will be bombarded with two to three times more radiation than astronauts aboard the International Space Station.
Sep 28th, 2020

It was time to upgrade from the upside-down laundry basket on a nightstand.
Sep 25th, 2020