Proton's exports are hampered as the current cars do not meet emission standards in a number of developed countries. 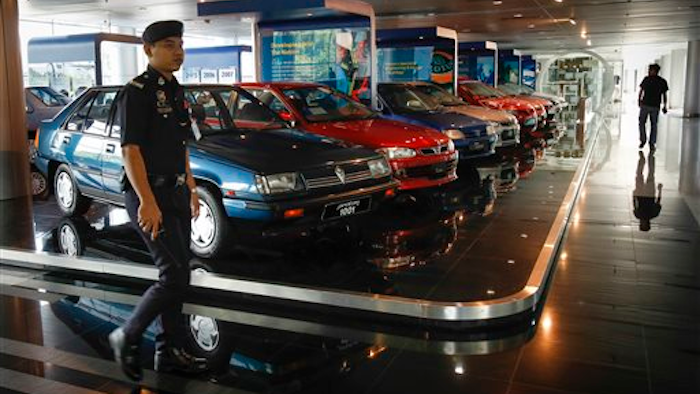 A Malaysian policeman walks by a fleet of national cars on display at the Proton Centre of Excellence Complex in Kuala Lumpur, Malaysia, Tuesday, March 1, 2016. Malaysian national car company Proton says it has begun shipping left-hand drive sedans to Chile as it seeks to tap new markets and revitalize exports.
AP Photo/Joshua Paul

Once king of the road, Proton's share in domestic car sales plunged to just 15 percent last year, from over 50 percent a decade ago.

The company has struggled with a perception of poor quality and intense competition. Exports have been lackluster, averaging 5,000 units a year or about 5 percent of its total sales.

Proton's Chief Executive Abdul Harith Abdullah said the company hopes to sell 1,000 cars in Chile this year. Vehicles in Chile drive on the right side of the roads, as is common in most markets outside Britain and its former colonies.

He said a free trade agreement signed between Malaysia and Chile in 2012 grants Proton a 6 percent exemption in import duty.

"We have to make our presence felt but to grow the brand will take many, many years," he said. Proton cars in Chile will be distributed by Andes Motor, which currently deals with buses, trucks and luxury cars, he added.

As part of efforts to boost sales, Abdul Harith said Proton is building a series of new engines with higher fuel efficiency and lower emission, which will allow it to meet more stringent regulations in European countries.

Proton's exports are hampered as its current cars do not meet emission standards in a number of developed countries, officials said. The new engines are expected to be ready only in two years.