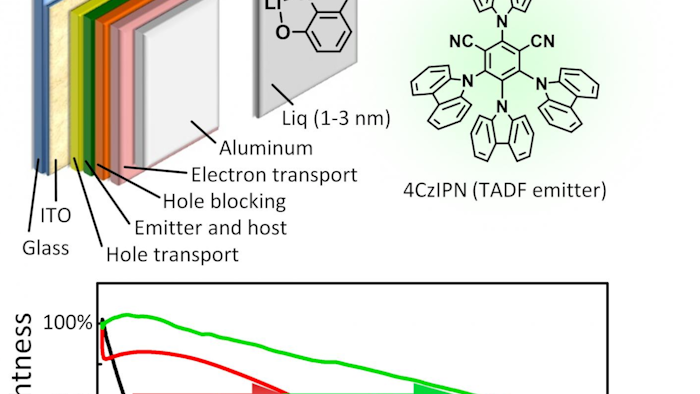 Using the OLED structure in this schematic, researchers were able to delay the degradation in brightness of an OLED with the TADF emitter 4CzIPN by eight to sixteen times. First, the hole blocking layer was sandwiched between layers of Liq with thicknesses of 3 nm on the emitter side and 2 nm on the electron transport side.
This newly developed modification enhanced the lifetime by eight times (red line). The lifetime was further increased by a factor of sixteen overall (green line) by also doping the emitter and host layer with an electron transport material and doping the electron transport layer with Liq, two enhancements previously reported in the literature for other OLEDs. The devices were operated at a constant current with an initial brightness of 1,000 cd/m2, and the lifetime plots in this figure were smoothed for clarity. These improvements bring highly efficient and low-cost displays and lighting with TADF materials one step closer to reality.
Daniel Ping-Kuen Tsang and William John Potscavage Jr.

With just a tiny tweak, researchers at Kyushu University greatly increased the device lifetime of organic light-emitting diodes (OLEDs) that use a recently developed class of molecules to convert electricity into light with the potential for increased efficiency at a lower cost in future displays and lighting.

The easily implemented modifications can also potentially increase the lifetime of OLEDs currently used in smartphone displays and large-screen televisions.

Typical OLEDs consist of multiple layers of organic films with various functions. At the core of an OLED is an organic molecule that emits light when a negatively charged electron and a positively charged hole, which can be thought of as a missing electron, meet on the molecule.

Researchers at Kyushu University's Center for Organic Photonic and Electronics Research (OPERA) changed this in 2012 with the demonstration of efficient emitters based on a process called thermally activated delayed fluorescence (TADF).

Through clever molecular design, these TADF materials can convert nearly all of the electrical charges to light without the expensive metal used in phosphorescent materials, making both high efficiency and low cost possible.

However, OLEDs under constant operation degrade and become dimmer over time regardless of the emitting material.

Devices that degrade slowly are key for practical applications, and concerns remained that the lifetime of early TADF devices was still on the short side.

But with the leap in lifetime reported in a paper published online March 1, 2016, in Scientific Reports, many of those concerns can now be put to rest.

"While our initial TADF devices lost 5% of their brightness after only 85 hours," said postdoctoral researcher Daniel Tsang, lead author on the study, "we have now extended that more than eight times just by making a simple modification to the device structure."

The newly developed modification was to put two extremely thin (1-3 nm) layers of the lithium-containing molecule Liq on each side of the hole blocking layer, which brings electrons to the TADF material, the green emitter 4CzIPN in this case, while preventing holes from exiting the device before contributing to emission.

The devices will last even longer in practical applications because the tests are performed at extreme brightnesses to accelerate the degradation.

Applying additional optimizations that have been previously reported, the 5% drop was further delayed to longer than 1,300 hours, over 16 times that of the initial devices.

"What we are finding is that the TADF materials themselves can be very stable, making them really promising for future displays and lighting," said Professor Chihaya Adachi, director of OPERA.

The benefits of the Liq layers are not limited to TADF-based OLEDs as the researchers also found an improvement using a similar device structure with a phosphorescent emitter.

Though still trying to completely unravel the degradation mechanism, the researchers found that devices with the Liq layers contain a much lower number of traps, a type of defect that can capture and hold a charge, preventing it from moving freely in the device.

These defects were observed by measuring tiny electrical currents created when charges that were frozen in the traps at extremely cold temperatures escape by receiving a jolt of thermal energy as the device is heated, a process called thermally stimulated current.

Having charges stuck in these traps may increase the chance for interactions with other charges and electrical excitations that can destroy the molecules and lead to degradation.

One of the next major challenges for TADF is stable and efficient blue emitting materials, which are necessary for full color displays and are also still difficult using phosphorescence.

"With the continued development of new materials and device structures," said Prof. Adachi, "we think that TADF has the potential to solve the challenge of efficient and stable blue emission."