New system can scale-up production of the smallest, but most useful, materials of this century. 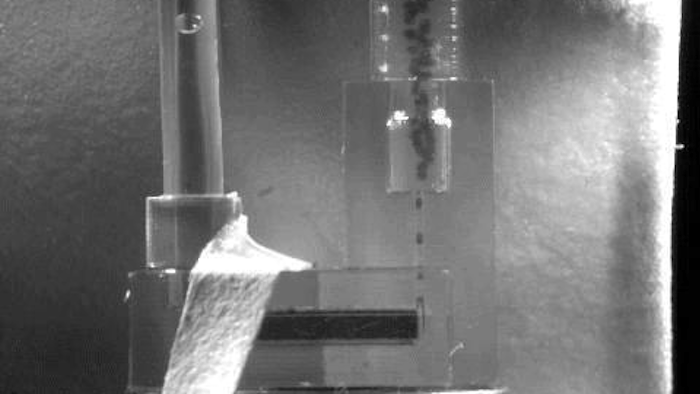 Nanoparticles form in a 3-D-printed microfluidic channel. Each droplet shown here is about 250 micrometers in diameter, and contains billions of platinum nanoparticles.
Richard Brutchey and Noah Malmstadt/USC

Nanoparticles - tiny particles 100,000 times smaller than the width of a strand of hair - can be found in everything from drug delivery formulations to pollution controls on cars to HD TV sets. With special properties derived from their tiny size and subsequently increased surface area, they're critical to industry and scientific research.

They're also expensive and tricky to make.

Now, researchers at USC have created a new way to manufacture nanoparticles that will transform the process from a painstaking, batch-by-batch drudgery into a large-scale, automated assembly line.

The method, developed by a team led by Noah Malmstadt of the USC Viterbi School of Engineering and Richard Brutchey of the USC Dornsife College of Letters, Arts and Sciences, was published in Nature Communications on Feb. 23.

Consider, for example, gold nanoparticles. They have been shown to be able to easily penetrate cell membranes without causing any damage - an unusual feat, given that most penetrations of cell membranes by foreign objects can damage or kill the cell. Their ability to slip through the cell's membrane makes gold nanoparticles ideal delivery devices for medications to healthy cells, or fatal doses of radiation to cancer cells.

"It's not the gold that's making it expensive," Malmstadt said. "We can make them, but it's not like we can cheaply make a 50 gallon drum full of them."

Right now, the process of manufacturing a nanoparticle typically involves a technician in a chemistry lab mixing up a batch of chemicals by hand in traditional lab flasks and beakers.

Brutchey and Malmstadt's new technique instead relies on microfluidics - technology that manipulates tiny droplets of fluid in narrow channels.

"In order to go large scale, we have to go small," Brutchey said. Really small.

They then built a parallel network of four of these tubes, side-by-side, and ran a combination of two non-mixing fluids (like oil and water) through them. As the two fluids fought to get out through the openings, they squeezed off tiny droplets. Each of these droplets acted as a micro-scale chemical reactor in which materials were mixed and nanoparticles were generated. Each microfluidic tube can create millions of identical droplets that perform the same reaction.

This sort of system has been envisioned in the past, but its hasn't been able to be scaled up because the parallel structure meant that if one tube got jammed, it would cause a ripple effect of changing pressures along its neighbors, knocking out the entire system. Think of it like losing a single Christmas light in one of the old-style strands - lose one, and you lose them all.

Brutchey and Malmstadt bypassed this problem by altering the geometry of the tubes themselves, shaping the junction between the tubes such that the particles come out a uniform size and the system is immune to pressure changes.