Onion Producer Must Pay $1.4M in Back Wages

Giving advice does not make you a farmer.

Bland Farms Production and Packaging is a Vidalia, GA-based onion producer. Yesterday, a U.S. District Court ordered the company to pay nearly $1.5 million ($1,480,268) in back wages and damages for violating the Fair Labor Standards Act. A U.S. Department of Labor investigation discovered that Bland didn't pay overtime to about 460 employees over a six-year period.

According to the Fair Labor Act, workers are owed time-and-a-half when they work more than 40 hours in a week. Agriculture employees are typically exempt from the overtime rule when they are involved in growing, processing and packaging a product grown by the company.

But this is where it gets tricky, because Bland Farms employees were packaging and processing onions that were grown by other farmers who were contracted by the company.

The company tried to argue that since it provided advice to the contract farmers, the company should be recognized as the onion farmer. The court didn't agree, rejected the argument, and determined that Bland merely processed and packaged onions from outside farming operations.

To make it worse, the court also found that Bland did not act in good faith when it continued to deny workers overtime wages after the Department of Labor filed its complaint. As a result, part of that $1.5 million includes more than $500,000 in liquidated damages for workers who were denied overtime wages from the time of the lawsuit in 2014 to the present.

In a press release, Wayne Kotowski, who is with the DOL's Wage and Hour Division, said the decision "recovers back wages for hundreds of workers in an industry where these violations are all too common.”

The department of labor hopes that the case not only sends a message to other agricultural producers, but levels the playing field for companies who pay employees as the law requires.

We reached out to Bland Farms for a statement, but have not yet received a response. 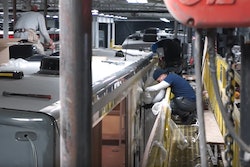 RV Manufacturer to Pay $55K in Back Wages