The shutdown comes after a worker reportedly died of COVID-19. 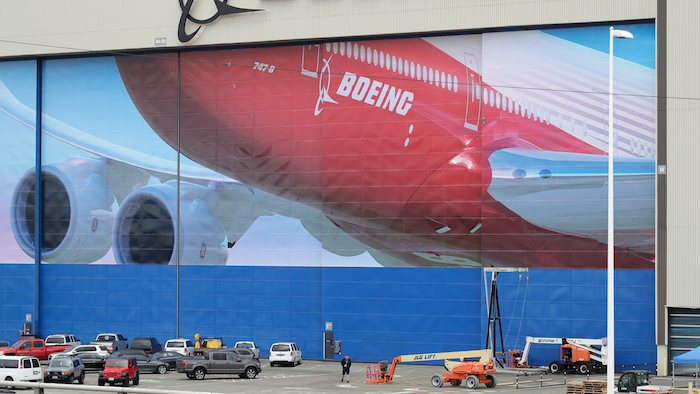 A worker walks near a mural of a Boeing 747-8 airplane at the company's manufacturing facility in Everett, Wash., Monday, March 23, 2020, north of Seattle.
AP Photo/Ted S. Warren

SEATTLE (AP) — Boeing will suspend operations at its Seattle area facilities due to the spread of coronavirus, idling tens of thousands of aerospace workers, the company said Monday.

At least 110 people have died from COVID-19 in Washington state, mostly in the Seattle area. Boeing employs about 70,000 people in the region. The company said 32 employees have tested positive for the virus, including 25 in the greater Seattle area.

Operations would be reduced beginning Wednesday, Boeing President and CEO Dave Calhoun said in a statement, and production would be suspended for two weeks.

"This necessary step protects our employees and the communities where they work and live," he said.

Production is continuing at a Boeing plant in South Carolina where Boeing 787 jetliners are assembled.

The company said employees in greater Seattle who can work from home will continue doing so and those who can't - like the tens of thousands of machinists who build airplanes - will receive paid leave.

"We will keep our employees, customers and supply chain top of mind as we continue to assess the evolving situation," Calhoun said. "This is an unprecedented time for organizations and communities across the globe."

Boeing's shutdown comes after a worker died of COVID-19. The Seattle Times reports that co-workers and a union official confirmed Sunday's death of the man who worked in Everett. The newspaper said the man was an inspector who had worked for Boeing for 27 years.

The machinists’ union said it supported the decision to suspend production, according to a message on its website. Boeing said it was still trying to confirm the employee’s death.

Boeing operates two commercial aviation production facilities in the Seattle area, one in Everett and another in Renton. Its Everett facility, north of Seattle, is the largest building in the world and produces airplanes like the 777s, 787s, 767s and 747s– along with the KC-46A military refueling and transport plane. About 30,000 people work there.

Washington Gov. Jay Inslee applauded Boeing's decision. “Now is a time for bold actions like these," he said in a statement.

Boeing shares rallied Monday, however, gaining 11.2% to $105.62. Goldman Sachs had upgraded the shares to “buy” from “neutral.” Analyst Noah Poponak said the shares have hit a trough after a one-year drop of about 80%, making them attractive to investors.

Poponak thinks Boeing has enough liquidity to get through a lean 2020, and the long-term outlook for the industry remains good. “We think travel by flight will be as popular as ever once COVID-19 is resolved,” he said in a note to investors.

The virus has added to Boeing’s crisis surrounding the 737 Max, which remains grounded more than a year after two deadly crashes. The outbreak has caused airlines to cancel tens of thousands of flights. Analysts expect cash-strapped airlines to defer deliveries of new planes through 2020 and possibly longer.