There will be partial factory shutdowns, deep cleaning of equipment and longer periods between shifts. 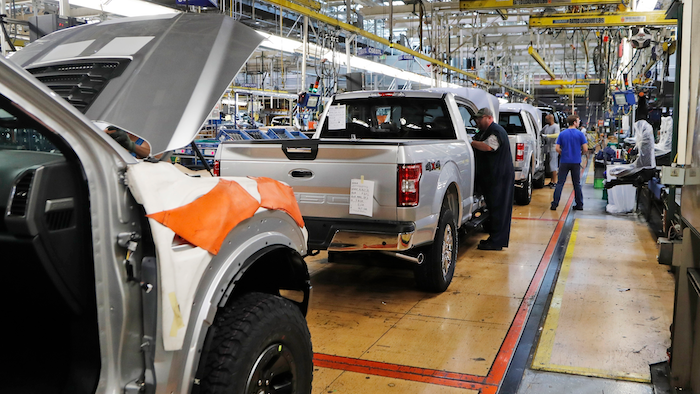 DETROIT (AP) — Detroit's three automakers have agreed to partial factory shutdowns, deep cleaning of equipment and longer periods between shifts to head off union demands for U.S. plant closures due to the coronavirus threat.

The agreements came Tuesday night after union officials spoke individually with General Motors, Ford and Fiat Chrysler. The companies also agreed to “extensive plans” to avoid union members coming in contact with one another, the United Auto Workers union said in a statement.

The union said earlier in the day that it wanted the automakers to shut down their factories for two weeks to keep its members safe from the spreading coronavirus.

Each company agreed to different provisions depending on its situation, but generally, automakers agreed to cut shifts on a rotating basis, which would idle factories for long periods to clean the building and equipment. Some companies agreed to cut overtime work to build space between shifts for added cleaning. Details of how to keep workers apart were still being worked out and more announcements will be coming in the next 24 hours, the union said in a statement.

“All three companies have agreed to new measures that will increase adherence to CDC (Centers for Disease Control) recommendations on social distancing in the workplace,” the statement said.

Officials have recommended that people not gather in large groups and try to stay at least 6 feet (about 2 meters) from each other to stop the virus that causes COVID-19 from spreading.

Earlier Tuesday UAW President Rory Gamble said in an email to members that the companies were not willing to stop production when the union asked for it Sunday. Gamble says the union gave Ford, General Motors and Fiat Chrysler two days to put together plans to safeguard workers. That period ended Tuesday afternoon.

Gamble said if the union isn't satisfied it will take unspecified further action to protect members.

The three companies employ about 150,000 auto workers at dozens of factories and parts depots across the country. Most of the manufacturing footprint is concentrated in the industrial Midwest, but the companies also have plants in Kentucky, Tennessee, Texas and other states.

The dispute came as union members complained that continued work at the plants would expose them to the virus.

Industry analysts have said it will be difficult to keep the factories open for very long as the COVID-19 virus spreads. Fiat Chrysler, Ford, Volkswagen, Daimler AG and PSA Groupe have closed their European factories to help stop the virus from spreading.

“There's very few industries where you get this many people together and they all touch the same things,” said Kristin Dziczek, vice president of labor and manufacturing for the Center for Automotive Research, an industry think tank in Michigan.

GM believes it can run the plants safely with preventive measure it has put in place since January and enhancements it is working on, spokesman Jim Cain said. Fiat Chrysler says it already has put “extensive protocols” in place to ensure the health and safety of workers. “We are continuing to carefully monitor the situation and are making improvements as needed,” spokeswoman Jodi Tinson said in a statement. Ford said it's working closely with the union and will announce details later.

Analysts expect U.S. auto sales to take a nosedive as people stay home to avoid other people. The industry likely has enough inventory to satisfy slower demand due to the virus, they have said. Ford reported Tuesday that sales had fallen in Europe and that parts supplies have been interrupted.

On Sunday, the union and companies announced they would form a task force to deal with worker safety as the plants continued operating.

Seventeen workers at a Fiat Chrysler factory in Warren, Michigan, walked off their jobs in the paint shop Monday over concerns about the novel coronavirus. A worker at an FCA transmission plant in Kokomo, Indiana, tested positive for the virus last week. He and nearby co-workers were told to stay home and his work area was deep cleaned. Production continued at both factories.

How Virus Could Impact the Toy Business