One person was killed and dozens of homes were damaged. 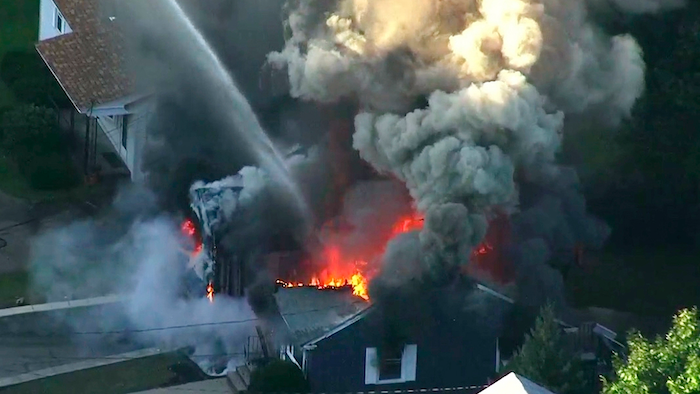 In this Sept. 13, 2018 file image from video provided by WCVB in Boston, flames consume the roof of a home following an explosion in Lawrence, Mass.
WCVB via AP, File

BOSTON (AP) — A utility company pleaded guilty Monday to causing a series of natural gas explosions in Massachusetts that killed one person and damaged dozens of homes.

The president of Columbia Gas of Massachusetts, Mark Kempic, entered the plea in Boston's federal court on behalf of the company responsible for the blasts that tore through three communities north of Boston in September 2018.

As part of the plea agreement, Columbia Gas of Massachusetts will pay a $53 million fine for violating the Pipeline Safety Act. It's the largest criminal fine ever imposed under the pipeline safety law.

The company said when the plea deal was announced last month that it takes full responsibility for the disaster in the Merrimack Valley.

“From the very outset, the company accepted responsibility for the tragic events on Sept. 13, 2018. Today’s entry of its plea is another step in that process,” Alejandro Mayorkas, an attorney for the company, told reporters after the hearing.

Eversource has agreed to buy Columbia Gas of Massachusetts' natural gas assets for $1.1 billion. Any profit from the sale of the company will be handed over to the federal government along with the criminal fine.

Investigators found that Columbia Gas violated minimum safety standards for starting up and shutting down gas lines through a “pattern of flagrant indifference.”

The explosions and fires outraged the communities of Lawrence, Andover and North Andover, where thousands of homes and businesses went without gas service for weeks, and months in some cases, during the winter.

Leonel Rondon, 18, died when a chimney collapsed on his vehicle in the driveway of a friend’s home — hours after he had gotten his driver's license. About two dozen others were injured, and dozens of buildings were damaged or destroyed.