The Fulton County Emergency Services and Disaster Agency reported that multiple buildings had been damaged and that large amounts of debris were scattered around the town square. 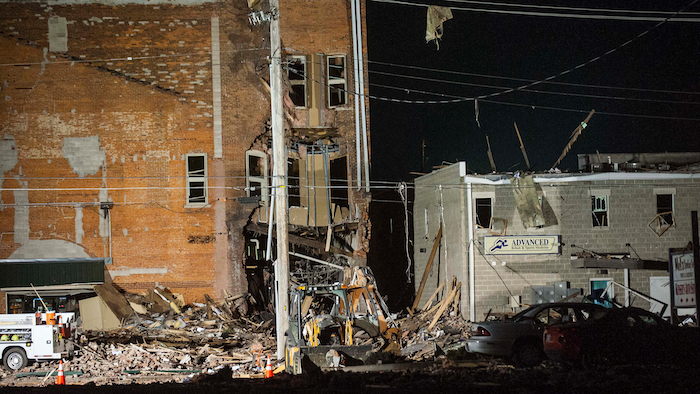 Authorities say one person was killed and several people injured in a natural gas explosion in the central Illinois community of Canton, Wednesday. Officials say the explosion Wednesday evening occurred near the downtown square and damaged several buildings.
Lewis Marien/The Journal-Star via AP

CANTON, Ill. (AP) — The area around a downtown square was closed Thursday as crews assessed damage from a natural gas explosion that killed one person and injured several others in the central Illinois community of Canton. The Fulton County Emergency Services and Disaster Agency said early Thursday that secondary searches found no additional casualties and area businesses would remain closed for the day.

The explosion Wednesday evening occurred near the downtown square and damaged several buildings. It shattered windows several blocks away and forced the evacuation of residents from nearby apartment buildings, officials said.

Jill Dillefeld, of Canton, a psychiatric nurse, told the (Peoria) Journal Star that she was eating at a bar about a block from the square when she heard "the biggest kaboom I have ever heard in my life."

"Everyone jumped," she said. "The door where I was sitting blew open."

Authorities said the cause of the explosion, which occurred at the Opera House Professional Center, hasn't been determined. The explosion happened shortly before 6 p.m. after Ameren Illinois workers arrived around 5:30 p.m. following a report that a contractor had damaged a gas line.

"The crew squeezed off the gas and was in the process of making repairs when the explosion occurred," Ameren Illinois said in a statement. "We are investigating the cause of the incident and have no other details to report at this time."

Authorities said 11 victims were taken to Graham Hospital in Canton. Fulton County Coroner Steve Hines said one of the victims — an Ameren Illinois employee — later died at the hospital. The worker has not been identified.

One victim was taken to OSF Saint Francis Medical Center in Peoria with non-life threatening injuries.

The Fulton County Emergency Services and Disaster Agency reported that multiple buildings had been damaged and that large amounts of debris were scattered around the town square. Onlookers reported that the historic 19th century Opera House, which now houses offices, had been severely damaged by the blast.

"We have structural engineers in the area checking area buildings. This is a very slow and methodical process. They are working hard and as fast as possible," the Fulton County ESDA said in a statement.