Half of World's Sandy Beaches at Risk from Climate Change

The beaches could disappear by the end of the century if climate change continues unchecked. 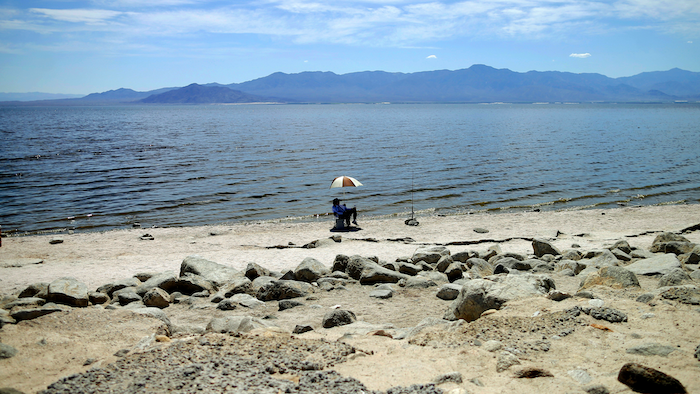 In this April 30, 2015 file photo, a man fishes along the receding banks of the Salton Sea near Bombay Beach, Calif. Scientists say that half of the world's sandy beached are at risk of disappearing by the end of the century if climate changes continues unchecked. Researchers at the European Union's Joint Research Center in Ispra, Italy, used satellite images to track the way beaches changed over the past 30 years and project how global warming might affect them in the future.
AP Photo/Gregory Bull, File

BERLIN (AP) — Scientists say that half of the world's sandy beaches could disappear by the end of the century if climate change continues unchecked.

Researchers at the European Union's Joint Research Center in Ispra, Italy, used satellite images to track the way beaches have changed over the past 30 years and simulated how global warming might affect them in the future.

“What we find is that by the end of the century around half of the beaches in the world will experience erosion that is more than 100 meters," said Michalis Vousdoukas. "It's likely that they will be lost.”

The study, published Monday in the journal Nature Climate Change, found that the extent to which beaches are at risk depends on how much average global temperatures increase by the year 2100. Greater temperature increases mean more sea level rise and more violent storms in some regions, causing more beaches to vanish beneath the waves.

“The projected shoreline changes will substantially impact the shape of the world’s coastline," more than a third of which is sandy beach, the authors wrote.

Beaches are valuable for recreation, tourism and wildlife, while also providing a natural barrier that protects coastal communities from waves and storms.

Many coastal areas, including beaches, are already heavily affected by human activity such as seashore construction and inland dams, which reduce the amount of silt flowing into oceans that's crucial for beach recovery.

Some countries will be more affected than others, the researchers said. Gambia and Guinea-Bissau in West Africa could lose more than 60% of their beaches, while predictions for Iraq, Pakistan, the island of Jersey in the English Channel and the Pacific island of Palau are similarly dire.

Australia would be hardest-hit in terms of total beach coastline lost, with over 12,000 kilometers (7,500 miles) at risk. The United States, Canada, Mexico, China, Iran, Argentina and Chile would also lose thousands of kilometers (miles) of beach, according to the study.

Andres Payo, an expert on coastal hazards and resilience at the British Geological Survey, said that while the study's methods were sound, its claims should be treated with caution.

“There are many assumptions and generalizations that could change the outcome of the analysis both qualitatively and quantitatively,” said Payo, who wasn't involved in the study.

However, Vousdoukas said the amount of beach loss estimated by his team was in fact "a bit conservative” and could be higher.

The group considered two different warming scenarios — one in which average global temperatures rise by 2.4 degrees Celsius by the end of the century and another that predicts an increase twice as high. The Paris climate accord's most ambitious target, of capping warming at 1.5 C, wasn't considered because scientists consider it unlikely to be achieved, Vousdoukas said.

The study's authors calculated that up to 40% of shoreline retreat could be prevented by reducing the greenhouse gas emissions that are driving climate change, but said that large and growing populations living along the coast will also need to be protected through other measures.

Citing the example of the Netherlands, which has battled the sea for centuries and even reclaimed substantial areas of low-lying land, the authors said “past experience has shown that effective site-specific coastal planning can mitigate beach erosion, eventually resulting in a stable coastline.”