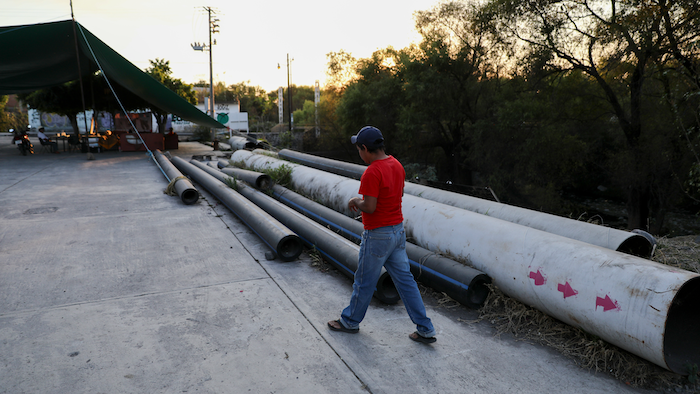 A man walks by pipes left on the ground after activists blocked the final meters construction of the thermo-electric plant pipeline in San Pedro Apatlaco, Morelos state, Mexico, Saturday, Feb. 22, 2020. The project has advanced in fits and starts for more than a decade. It's essentially complete, but legal stays have also prevented connection of the last mile of pipeline needed to fire up the power plant.
AP Photo/Eduardo Verdugo

HUEXCA, Mexico (AP) — The thermo-electric plant looms over the smattering of homes and cows munching on dried corn stalks in Huexca, a tiny farm community in central Mexico where many residents view it as a sleeping monster ready to roar to life.

During test runs of equipment in the still idle power plant, residents say, the noise reached more than 110 decibels, as loud as a jet engine at takeoff and roughly 50% above levels considered tolerable for the average human pain threshold. People say they experienced intense headaches, children vomited and some residents suffered hearing loss.

“We didn't want the thermo-electric plant. They imposed it on us," said Teresa Castellanos, a lifelong resident of Huexca who has fought since 2012 against the government project.

Huexca means “place of happiness” in the indigenous Náhuatl language, but the town of fewer than 1,000 inhabitants has become a place of discord. Some people want the plant put into operation. Others are vehemently against it, saying it will destroy their rural life and possibly force them to abandon the only land they have ever known.

The power plant is part of a mega-energy project that includes a natural gas pipeline that traverses three states. It’s at the heart of a years-long, contentious battle, and is now raising questions among some people about the commitments of the new leftist government to indigenous land rights.

Dozens of mostly indigenous communities along the 159 kilometers (nearly 100 miles) of pipeline have united to fight the project, which they believe will deprive them of water for their crops and contaminate the soil and air.

Hundreds of environmentalists marched in Mexico City on Friday to show their discontent with the government's big infrastructure plans. In addition to the mega-energy project, those plans include a tourist train through Mayan lands and a cargo rail line in the south that activists say put business interests ahead of the wishes of indigenous communities, while endangering flora and fauna.

The power project has advanced in fits and starts for more than a decade. It's essentially complete, but legal stays and blockades by locals have prevented connection of the last few hundred feet of pipeline needed to fire up the power plant.

In the town of San Pedro Apatlaco, men from villages along the pipeline route take turns sleeping under a tarp on the banks of the Cuautla River to make sure the final tubes aren’t laid down. Those pipes would carry water between the thermo-electric plant and a water treatment facility. The men have camped there for over three years, next to abandoned tubes.

President Andrés Manuel López Obrador, who took office Dec. 1, 2018, wants the stalled project up and running. Scrapping it would cost the country more than $1 billion, he says.

“That is money from the budget, money of the people,” López Obrador said last week.

The first phase of the project involved building the pipeline under communities around the Popocatépetl volcano, which stands between the sprawling Mexican capital and the industrial city of Puebla.

Residents complained the construction began surreptitiously, without public consultations. They worry the pipeline could leak or even explode, this being a volcanic region. The national human rights commission agrees that the project trampled indigenous rights.

Last year, activist Samir Flores, who had drummed up opposition, was shot to death outside his home in the town of Amilcingo. Just days earlier, he had challenged government assertions about the power project at a public forum.

Castellanos said she has also received death threats. She has been beaten, she said, and told that her daughters would be sold into prostitution if she keeps fighting the plant.

She said the threats came from other residents of Huexca she accuses of being paid by government or private sources to generate local support for the project.

“This is how I live — like a caged bird,” she said, while roosters crowed outside.

Standing up for the environment is a dangerous undertaking in Mexico. Amnesty International says 12 environmental activists were killed in the first nine months 2019, while London-based Global Witness counted 15 such killings in 2017 and 14 in 2018.

In January, Homero Gómez González, who defended the monarch butterfly against loggers and farmers in Mexico's western state of Michoacán, was found dead with a head wound at the bottom of a holding pond.

Investigations rarely establish clear motives or lead to convictions in such cases.

In the killing of Samir Flores, family and friends say they don’t believe Mexican authorities have made a genuine effort to find the culprit.

“It has been a year and we have no indication that points to who the murderers were,” said Liliana Velázquez, Flores’ widow and mother of his four children.

“We want these mega-projects out of our lands,” she said.