He led the union from the auto industry's dark days of the early 1980s to the prosperity of the mid-1990s. 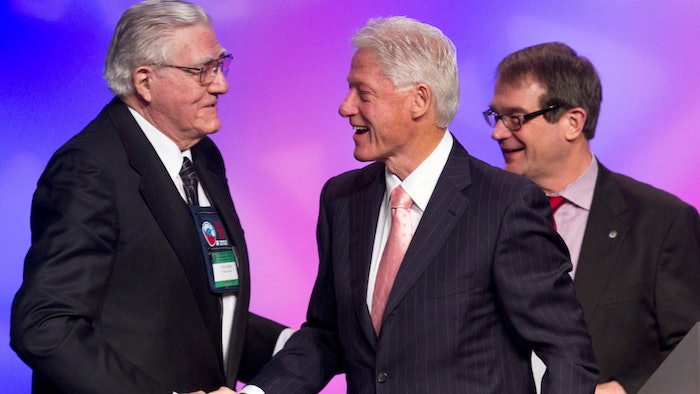 In this March 1, 2012 file photo, former President Bill Clinton shakes hands with Owen Bieber, left, with United Auto Workers union (UAW), at the 2012 UAW National Community†Action Program Conference, at the Marriott Wardman Park Hotel, in Washington. Bieber, who led the United Auto Workers union from the auto industry's dark days of the early 1980s to the prosperity of the mid-1990s, has died. He was 90.
AP Photo/Jacquelyn Martin, File

Owen Bieber, who led the United Auto Workers union from the auto industry's dark days of the early 1980s to the prosperity of the mid-1990s, has died. He was 90.

Neither as charismatic as his predecessor, Douglas Fraser, nor as confrontational as his successor, Stephen Yokich, the low-key Bieber had an easygoing manner that belied his 6-foot-4, 265-pound frame and the results he produced at the bargaining table.

Taking over as its president in 1983, Bieber shepherded the UAW through a recession, the Reagan era, industry downsizing and rapidly expanding global competition. Bieber led the UAW through contract talks that won its members wages, benefits and job and income security that were unmatched in other major U.S. industries.

“Owen Bieber's death is a loss for our union and all working people," UAW President Rory Gamble said in a statement. “He was not afraid of tough battles or taking a stand on controversial issues.”

Under Bieber, the UAW also actively supported the Solidarity labor movement, which challenged Poland's Communist government, and the anti-apartheid movement in South Africa. Bieber traveled to South Africa twice, raising the alarm about the imprisonment of labor activists and smuggling images of torture out of the country. In 1986, he was arrested while marching at the South African embassy in Washington D.C.

When former South African President Nelson Mandela toured the U.S. after his release from prison, Bieber stood at his side during a rally in Detroit. In 2003, Archbishop Desmond Tutu singled Bieber out during a visit to Grand Rapids, Michigan.

“We came asking for help, and you gave that help and accomplished this extraordinary thing," Tutu said, according to the UAW.

Bieber was born Dec. 28, 1929, in North Dorr, Mich. He joined the union in 1948 when he went to work bending wire for car seats at McInerney Spring and Wire Co. in Grand Rapids and became a shop steward the following year. By 1956 he was president of his local.

In 1961, then-UAW president Walter Reuther made Bieber a member of the regional staff. He became regional director in 1974 and was elected a UAW vice president in 1980. Three years later, he succeeded Fraser as president.

General Motors Co., Ford Motor Co. and Chrysler Corp. had to get leaner during Bieber's tenure to compete with Japanese companies that were winning over American buyers with their smaller, more fuel efficient cars. But the UAW was able to negotiate agreements that helped workers keep their pensions or kept their paychecks coming even if they were laid off.

"We did what unions are supposed to do," Bieber said shortly before Yokich succeeded him as president. “If you look at the rough road that workers have had to come over and live through since the late 1970s ... a worker who belonged to the UAW, who was a member of the UAW, probably that was the best thing that could have happened to them.”

Union membership shrunk in size by about half between 1979 and 1995, Bieber's last year as president. Bieber had hoped to unionize Japanese and German carmakers when they opened U.S. plants, but he only had one success: a GM-Toyota joint manufacturing plant in Fremont, California. GM closed that plant in 2010; it's now owned by Tesla Inc., which is also not unionized.

One of Bieber's sons, Ron Bieber, is now president of the Michigan AFL-CIO labor union.

“Owen Bieber left behind a world that is better off because of his activism and dedication to service to others," Ron Bieber said in a statement.