He orchestrated a bribery and kickback scheme that helped fuel the opioid crisis. 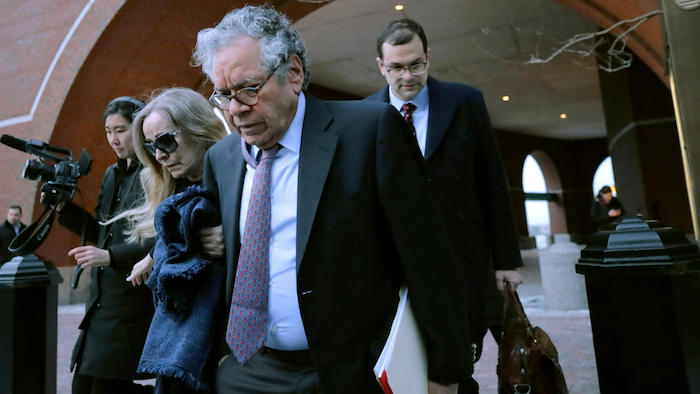 Insys Therapeutics founder John Kapoor, front, departs federal court Thursday, Jan. 23, 2020, in Boston, after he was sentenced to 5 1/2 years in prison for orchestrating a bribery and kickback scheme prosecutors said helped fuel the opioid crisis. He was found guilty the previous May of racketeering and conspiracy in a scheme where millions of dollars in bribes were paid to doctors across the United States to prescribe the company's highly addictive oral fentanyl spray, known as Subsys.
AP Photo/Charles Krupa

BOSTON (AP) — The founder of an Arizona pharmaceutical company was ordered to spend 5 1/2 years in prison Thursday for orchestrating a bribery and kickback scheme prosecutors said helped fuel the opioid crisis.

John Kapoor, 76, the former chairman of Insys Therapeutics, was sentenced in Boston's federal court after a jury found him guilty of racketeering conspiracy last May. The 10-week trial revealed sensational details about the company's marketing tactics, including testimony that a sales executive once gave a lap dance to a doctor the company was wooing.

Kapoor was also ordered to pay a $250,000 fine, the maximum under sentencing guidelines.

He and others were accused of paying millions of dollars in bribes to doctors across the United States to prescribe the company’s highly addictive oral fentanyl spray, known as Subsys. The bribes were paid in the form of fees for sham speaking engagements that were billed as educational opportunities for other doctors.

The company was also accused of misleading insurers to get payment approved for the drug, which is meant to treat cancer patients in severe pain and can cost as much as $19,000 a month.

Along with Kapoor, four others from Insys also were convicted last year and two pleaded guilty. All of them have been dealt prison sentences, ranging from a year and a day to nearly three years.

Prosecutors were requesting 15 years in prison for Kapoor, calling him the “lynch pin” of the operation.

“This was in every way a top-down conspiracy that John Kapoor ran,” Assistant U.S. Attorney Nathaniel Yeager said at the hearing. "He was already a billionaire when this started, and this made him even richer.”

Kapoor's lawyers countered that the scheme was organized by other executives and that Kapoor was never aware of any wrongdoing that could harm patients. They called him an “immigrant success story," noting that the India-born Kapoor developed Subsys after seeing his wife suffer and die from breast cancer.

During the hearing Thursday, several patients addressed the court and described their suffering after being prescribed high doses of Subsys by doctors who were paid by Insys.

Some said the drug caused their teeth to fall out and left them with memory loss. Some said they became addicted to the drug for years. One woman, Deborah Fuller, said her family has been in “constant agonizing grief” since her daughter, Sarah Fuller, died of an overdose at age 32.

Kapoor silently watched them speak and, when he was allowed to address the court, opened with an apology.

“I'm heartbroken by the words of the patients who spoke here today and those who spoke at the trial,” he said. “I sincerely apologize to them and their families."

Still, Kapoor asked the judge to consider his other work developing treatments for AIDS patients and those with heart problems. He requested leniency because of his age, noting that, at 76, his time is “limited.”

U.S. District Judge Allison D. Burroughs said she took Kapoor's age into account but also recognized the harm caused by his company. Ultimately, she said, it was never clear exactly what role each executive played in the scheme, so she treated Kapoor and two of his executives as “co-equals at the top of this triangle."

The two others she referenced were dealt lighter sentenced because they pleaded guilty and cooperated with authorities. Former Insys CEO Michael Babich was sentenced to 2 1/2 years in prison on Wednesday, while Alec Burlakoff, the former vice president of sales, was sentenced Thursday to more than 2 years.

After the hearing, U.S. Attorney Andrew Lelling told reporters he objected to the sentences in the case, which were far lower than what prosecutors sought.

“My view is that the public interest demanded higher sentences for these defendants,” Lelling said. “These guys basically took a publicly traded pharma company and turned it into an engine for corrupting doctors and jeopardizing the health of men and women nationwide.”

Prosecutors also asked the judge to detain Kapoor until he reports to prison on March 5, saying he posed a flight risk because of his wealth and his overseas connections. Burroughs denied the request, saying he has “behaved like a gentleman” through the case.

During last year's trial, jurors heard from former employees who said Insys made a habit of hiring attractive women as representatives to boost sales of the drug. One former employee testified that a regional sales manager once gave a lap dance at a Chicago nightclub to a doctor whom Insys was pushing to write more prescriptions.

Jurors were also shown a rap video in which Insys employees danced and rapped around a person dressed as a giant bottle of the fentanyl spray. Prosecutors said the video was shown at a national sales meeting in 2015 and was intended to motivate reps to push Subsys to doctors.

The case was considered the first that sought to hold an opioid maker criminally liable for the drug crisis, which has claimed nearly 400,000 lives over the last two decades. At least two others have since faced criminal charges, but prominent companies including Purdue Pharma, the maker of OxyContin, have only faced suits that carry no threat of prison time.

Insys last year reached a $225 million settlement with the U.S. Department of Justice to end its criminal and civil probes, and the company has since filed for bankruptcy protection. It’s not clear whether the company will fully pay what’s owed.