China is seen as striving to overtake the U.S. as the dominant naval power in Asia and already boasts the world's largest navy in numbers of vessels. 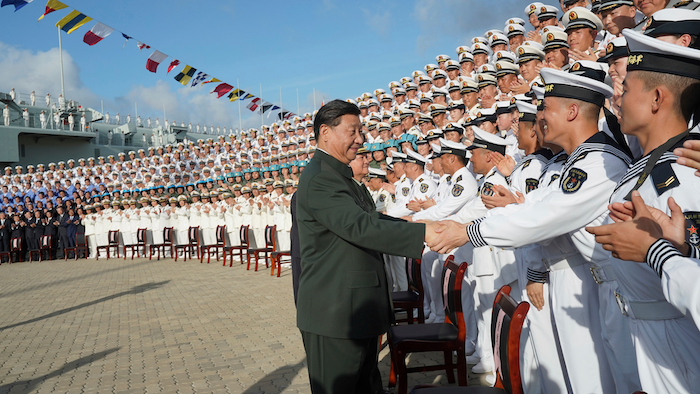 In this photo provided by China's Xinhua News Agency, Chinese President Xi Jinping, center, meets with representatives of the aircraft carrier unit and the manufacturer at a naval port in Sanya, south China's Hainan Province, Tuesday, Dec. 17, 2019. President Xi attended the commissioning of China’s first entirely home-built aircraft carrier, underscoring the country's rise as a regional naval power at a time of tensions with the U.S. and others over trade, Taiwan and the South China Sea.
Li Gang/Xinhua News Agency via AP

BEIJING (AP) — President Xi Jinping attended the commissioning of China’s first entirely home-built aircraft carrier, underscoring the country's rise as a regional naval power at a time of tensions with the U.S. and others over trade, Taiwan and the South China Sea.

The Shandong is the second Chinese aircraft carrier to enter service after the Liaoning, which was originally purchased as a hulk from Ukraine and entirely refurbished.

State media reported that about 5,000 representatives from the naval forces and aircraft carrier construction groups attended the commissioning ceremony Tuesday at a naval base near the city of Sanya.

The base in the southern island province of Hainan opens onto the South China Sea, where China is engaged in an increasingly heated dispute over territory and undersea oil and gas resources. China’s claim to virtually the entire strategic waterway, through which passes an estimated $5 trillion in trade annually, overlaps partially or in whole with five other governments.

Countries in the region, along with U.S. treaty allies including Japan and Australia, are also beefing up their navies and maritime law enforcement capabilities in response to Chinese actions such as the construction of man-made islands that Beijing has equipped with airfields and missile batteries.

State television footage showed Xi being applauded as he boarded the ship to present a flag and certificate, sign the log and visit with sailors. He also inspected aircraft and toured the bridge and flight coordination operations center.

“Commending China's achievements in aircraft carrier construction, Xi encouraged them to continue their efforts to make new contributions in the service of the party and the people,” the official Xinhua News Agency reported.

Like the Liaoning, the Shandong is named after a northern province and is based on a Soviet design with a ”ski jump" style flight deck for takeoffs rather than the flat decks used by much larger U.S. aircraft carriers. It is powered by a conventional oil-fueled steam turbine power plant, rather than the nuclear fuel American carriers and submarines use.

The 50,000-ton Shandong completed sea trials last year before returning to its construction yard in the northern port of Dalian. Following the arrival of its air complement Chinese J-15 fighter jets, it was due to be commissioned before 2020. It sailed through the Taiwan Strait on its way to Hainan last month, prompting the island's military to scramble ships and planes to monitor its passage.

China is seen as striving to overtake the U.S. as the dominant naval power in Asia and already boasts the world's largest navy in numbers of vessels.

Beijing says aircraft carriers are needed to protect its coastline and trade routes, but they are also seen as backing up Beijing's claims to self-governing Taiwan and the South China Sea.