Crews finished draining all the fuel nearly three months after it capsized. 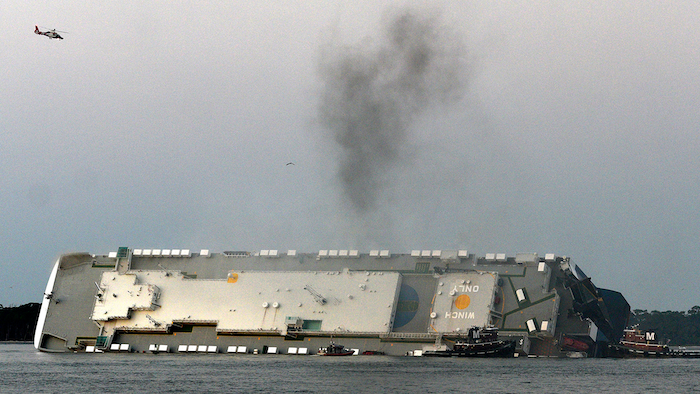 BRUNSWICK, Ga. (AP) — Crews have finished draining all of the fuel from an overturned cargo ship three months after it capsized off the coast of Georgia, the team overseeing salvage operations said Thursday.

Divers and other workers removed more than 320,000 gallons (1.2 million liters) of oil mixed with water aboard the South Korean ship Golden Ray. The vessel tipped over onto its side Sept. 8 shortly after leaving the Port of Brunswick and remains beached about 70 miles (112 kilometers) south of Savannah.

“The completion of the fuel removal allows the Unified Command to move on to our ultimate goal of safely removing the wreck of the Golden Ray," said Coast Guard Cmdr. Matt Baer said in a news release. "Removal of the vessel will be a highly complex and challenging operation.”

Siphoning all of the fuel from the ship proved a tough job as well. A total of 26 tanks needed emptying. Officials said some of them were submerged and could be reached only by rappelling into the ship's interior and then diving underwater. The interior of each drained fuel tank was then cleaned with steam to remove any residual fuel.

The salvage team has decided the Golden Ray, which still has 4,200 automobiles inside its cargo decks, will have to be removed in pieces. The Coast Guard said in November that the job could take another year.

Crews have begun working to remove the ship's propeller, propeller shaft and rudder to relieve the stress of their combined weight — about 130 tons (118 metric tonnes) — on the ship's hull, the salvage team's news release said.

Officials have not said what caused the Golden Ray to overturn. The ship's pilot and 23 crew members were all safely rescued.