The union says it's due to a lack of commitment by GM to build new vehicles in U.S. factories.

DETROIT (AP) — Talks between General Motors and the United Auto Workers union hit a snag Tuesday over what the union says is a lack of commitment by GM to build new vehicles in U.S. factories.

In a letter to members, union Vice President Terry Dittes wrote that the union has told GM that it doesn't see a commitment from the company to a workforce that has helped make it billions of dollars.

"We believe that the vehicles GM sells here should be built here," Dittes wrote. "There is no job security for us when GM vehicles are made in other countries for the purpose of selling them here in the U.S.A."

GM did not immediately respond to a request for comment Tuesday night.

Although both sides were still talking, the union demand could be a major sticking point because GM produces pickup trucks and several SUVs in Canada, Mexico, China, South Korea and other countries, and imports them to the U.S.

Dittes wrote that GM's alleged lack of commitment is one of the union's top priorities in talks to end the strike, but little progress has been made.

"Economic gains in this agreement will mean nothing without job security," Dittes wrote, adding that the union is fighting for a middle class way of life.

Just before the strike began Sept. 16, GM said it offered $7 billion worth of U.S. factory investments resulting in 5,400 new positions, a minority of which would be filled by existing employees. GM would not give a precise number.

A person briefed on the talks later said that $2 billion of that investment would be from joint ventures or parts suppliers that would pay less than what GM assembly line workers earn. The person didn't want to be identified because the talks are confidential.

On Sunday, the union voiced concerns in the talks about GM increasing production in Mexico, where it now builds pickup trucks, small cars and two SUVs. GM led all companies in automobiles produced in Mexico at just over 833,000 last year, according to LMC Automotive and the Center for Automotive Research, a think-tank based in Ann Arbor, Michigan. Of GM vehicles sold in the U.S., 22% are produced in Mexico.

The strike by 49,000 workers, now in its 23rd day, began Sept. 16, and immediately shut down all of GM's U.S. factories. Later two factories in Canada and Mexico were forced to close due to a lack of parts.

The strike has cost the company production of 165,000 cars and trucks and has passed the point where the GM can make up lost volume, according to auto industry analysts.

That means losses are starting to mount for GM even though its dealers have enough inventory to get by for several more weeks.

Talks also were hung up on hourly wage increases versus lump-sum payments favored by the company, according to a person briefed on the talks. They're also haggling over pensions, faster wage increases for workers hired after 2007, and guarantees of new products for U.S. factories, said the person, who didn't want to be identified because the talks are confidential.

Fifteen of GM's 18 North American assembly plants have been shut down by the strike, including everything in the U.S. and one plant each in Mexico and Canada, according to Bill Rinna, director of Americas Vehicle Forecasts for the LMC consulting firm.

"Once the strike ends, it may still take up to a week to get the parts pipeline going again. So we are likely looking at a loss of well over 200,000 vehicles," Rinna wrote in a note distributed Tuesday.

Much of that production can't be made up, especially at factories that make popular pickup trucks and large SUVs that already were on three shifts per day before the strike, said Kristin Dziczek, vice president of the Center for Automotive Research, an industry think tank.

The strike has cost GM about $1.6 billion according to numbers from JP Morgan analyst Ryan Brinkman, who estimates that GM is losing $82 million per day.

Strikers, meanwhile, are in their fourth week without earning a full paycheck from GM of around $1,200 per week before deductions. Instead they have to live on $250 per week in union strike pay. 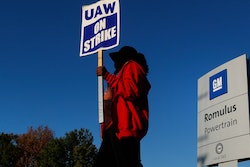 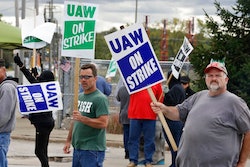 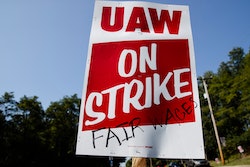