Union bargainers reportedly rejected GM's offer because it took money from other places to fund profit-sharing, and it didn’t give temporary workers a clear path to a full-time job.

DETROIT (AP) — General Motors offered striking union members wage increases or lump-sum payments in all four years of a proposed contract, as bargainers seek a deal to end a walkout that’s in its third week.

But union bargainers rejected the offer because it took money from other places to fund profit-sharing, and it didn’t give temporary workers a clear path to a full-time job, according to a person briefed on the negotiations.

Still, the offer, made late Monday, is likely to be the framework for whatever agreement is reached to end the strike by 49,000 workers that has halted production in the U.S. and severely cut output in Mexico and Canada. Both sides were still talking Wednesday.

“It’s not insulting,” Art Wheaton, an auto industry expert at the Worker Institute at Cornell University, said of the offer. “It’s not close enough to ideal, but they’re still talking.”

After GM presented the offer, bargainers for the United Auto Workers union made a counter offer that is now the subject of bargaining, according to the person, who asked not to be identified because details of the talks are private.

But another person briefed on the talks said much of what the union objected to, including proposed concessions, has been removed or is being bargained. That person said health care, a key sticking point with union members, would remain the same as it is now. The person, who also didn’t want to be identified because the talks are confidential, did not know the status of other provisions that were being discussed Wednesday.

Among the union’s big problems with the Monday offer is a provision requiring temporary workers to be employed for three uninterrupted years before they automatically become full-time. It’s unlikely the workers would not be laid off in three years, making it almost impossible to reach full-time status, the person said. Full-time workers on the picket lines say they want to see temporary workers get permanent jobs.

Full-time workers hired after 2007, who now are paid less than older workers, would get the same profit-sharing and ratification bonuses. But they wouldn’t get pay raises other than the steps on the pay scale negotiated in the last contract, the first person said of the Monday night offer. Those who have reached the maximum pay rate of $28 per hour would get a 2% lump sum payment in 2019 and 3% in 2021. But the union wants new hires to eventually make as much as older production workers who are paid $30 per hour.

Although the company promised uncapped profit-sharing, the Monday night offer proposed shifting money from annual quality bonuses and other payouts to fund any increase, the first person said.

GM also kept its offer to build an electric pickup truck at a plant in Detroit that it had planned to close, and to build an electric vehicle battery factory run by a joint venture somewhere in the area of Lordstown, Ohio, where GM also wants to close a factory, the person said.

Cornell’s Wheaton said both sides are haggling over labor costs that amount to less than 5% of the sticker price of a car, so he said he sees room for both sides to bargain. Bargainers for both sides know they have to come up with a deal that will be ratified by members who will want a payoff for going on strike, Wheaton said.

On the picket lines, members have said repeatedly that they want a bigger share of the more than $30 billion in profits that GM has made during the past five years. But GM wants to cut its labor costs so they are closer to those at U.S. factories run by foreign automakers, mainly in the South.

Workers earn $250 per week in strike pay while they’re on the picket lines, about one-fifth of what they normally make. But industry analysts say GM is losing more than $80 million a day as the strike continues. The union had $750 million in its strike fund when the work stoppage began Sept. 16, but GM has billions in cash on its balance sheet.

“Neither side has to give in. Both sides could string it out longer, but it becomes, ‘At what point is it worth it?’” Wheaton asked. 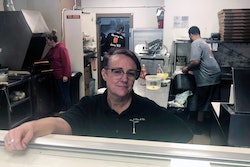 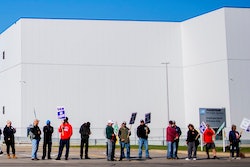