At one silk factory, the non-stop "clunk-click" of the weaving machinery is a loud but welcome sound. 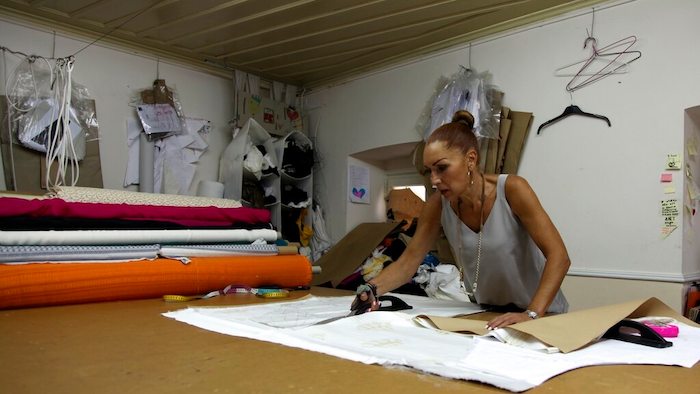 In this Wednesday, Sept. 4, 2019 photo, a seamstress works on a piece of white silk at Zeus+Dione atelier in Athens. Greece's financial crisis nearly snuffed out the country's centuries-old silk manufacturing tradition, but the end of the crippling recession has raised demand for fashion products and silk produced by a remote border town.
AP Photo/Iliana Mier

SOUFLI, Greece (AP) — At Kostas Mouhtaridis' silk factory in Soufli, the non-stop "clunk-click" of the weaving machinery is a loud but welcome sound.

The factory is a few hundred meters from the Evros River, which forms Greece's natural border with Turkey. It is one of Europe's most heavily militarized areas, patrolled constantly to deter illegal immigration into the European Union.

Soufli, a once-booming silk factory town in Greece's remote northeastern Thrace region, saw its centuries-old tradition of silkworm rearing, weaving and dying nearly snuffed out during Greece's decade-long financial crisis. The town had already suffered a heavy blow when cheaper Chinese and Indian silk flooded the market in the 1990s. The companies that managed to survive then were later finished off during the financial crisis that erupted in 2008.

By 2012, there were only two silk makers left in the town, eking out an existence by supplying small home furnishing stores.

Yet seven years later, Mouhtaridis has few complaints. The company founded by his father in 1977 has been revived by Greece's resurgent fashion and luxury goods industry as well as by technology that helps small-scale producers.

He now produces more than 200 times that amount annually for his largest customer.

Silk is the staple of offerings at Zeus + Dione, a luxury Athens label that prides itself on reinventing and incorporating laboriously made elements found in traditional Greek garments onto its easy-to-wear women's line. Craftspeople were scouted out in rural areas around Greece to make it happen, as the company sought to inject glamor to dying trades that typically struggled to connect with city dwellers.

The label's flagship store is now in a trendy shopping area in central Athens and the company's co-owner, bank executive Mareva Grabowski, is married to newly elected conservative Prime Minister Kyriakos Mitsotakis. She founded the company with her friend Dimitra Kolotoura, a former PR executive.

Kolotoura remembers walking into Mouhtaridis' silk factory as her company was just starting out seven years ago. He was skeptical when asked for 20 meters (65 feet) of 'spathoto' — an embossed silk that has become the firm's signature fabric.

The twist on tradition caught the attention of the fashion world and orders from overseas snowballed. Silk shirts and caftans made from spathoto and Amalia-motif fabric types can be found on sale in Los Angeles, Paris, London and elsewhere.

Soufli's other main silk maker, Giorgos Tsiakiris, found an alternate route to survival, giving up weaving to focus on printing. When the future of the family enterprise seemed uncertain, he bet the business on expensive digital technology.

The bet is paying off. Replacing traditional dying with a computerized system and buying room-sized printing machines revolutionized his operation, allowing him to provide customized designs requested by fashion houses all over Europe, among them the Greek label Parthenis.

Orsalia Parthenis took over the company from her parents, renewing a relationship with the silk factory that went back to the 1970s.

Soufli silk was "part of my growing up," she says, noting that she always found creative ways to include it in her collections.

"Soufli had focused mostly on traditional furnishing fabrics, things you'd use for curtains or tablecloths," she says, adding that instead she chose to use those fabrics for dresses, shorts and jackets.

When she found out that Tsiakiris was printing silk in 2006, Parthenis jumped at the chance to reach out to graphic designers and created a silk caftan line.

"They invested in machines to do more printing and it wasn't just the weaving part," she says. "Technology is what revived the industry."