Hope of Coming Back to Shuttered GM Plant Fades for Workers

Among the thousands of former Lordstown assembly plant workers now spread across GM factories in seven states, many were hoping GM revive production and rescue their old jobs. 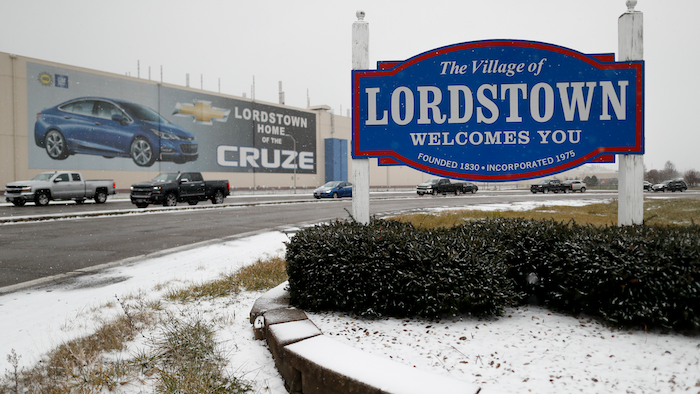 TOLEDO, Ohio (AP) — In the months since General Motors signaled the closing of its huge car plant in Lordstown, Ohio, Tammy Hurst put off setting a wedding date and watched her fiance, two sisters, a brother and a nephew leave their hometowns for new jobs.

All five transferred to GM plants in Kentucky, Missouri and Tennessee, upending her family and their weekly picnics, birthday parties and shopping outings.

"We've always been within 20 minutes of each other, and now we're all scattered everywhere," said Hurst, who is waiting to see if her fiance settles into his new job in Kentucky before joining him.

As for the wedding, that, too, will have to wait "until we figure out this mess."

Among the thousands of former Lordstown assembly plant workers now spread across GM factories in seven states, many were hoping that the automaker, facing pressure from President Donald Trump, would agree during contract talks to revive production that ended in March and rescue their old jobs.

But that hope is dwindling.

The battery plant proposal and the fate of the Lordstown plant are playing out amid negotiations aimed at ending the strike by 49,000 members of the United Auto Workers that has paralyzed GM auto production nationwide for nearly two weeks.

How many UAW jobs the company would need for the battery plant hasn't been disclosed, but it's likely to be a few hundred at the start and won't ever come close to the 4,500 who worked at Lordstown making the Chevrolet Cruze compact car just two years ago.

The wages would be much lower, too — as much as 50% below the $30-an-hour top pay now made by UAW production workers.

As for the electric vehicle plant, which would be run by a venture led by a company called Workhorse, it is unclear how many jobs would be created, how much they would pay and whether the project will even get off the ground .

All of this means it's doubtful any of the workers who have left Lordstown would consider coming back.

"It doesn't seem like it's going to happen," said Tommy Wolikow, who transferred to a GM factory in Flint, Michigan, but held off on buying a home because he hoped he could return to Ohio, where his 11-year-old daughter lives. "That's home, and it'll always be home as long as my family is there."

Of the workers who once staffed the plant around the clock, about 3,400 took GM up on transferring to factories around the country, some as far away as Arlington, Texas, said Dave Green, former president of the UAW local in Lordstown.

The rest retired from GM or left the company and decided to stay in the area, largely for family reasons, he said.

Tammy Hudak and Matt Himes, who grew up the shadow of the 6-million-square-foot (560,000-square-meter) plant that defined Lordstown for generations, are among those who pulled up roots to work at GM in Spring Hill, Tennessee.

Both are still waiting for the rest of their families to join them. Hudak shed tears talking about being separated from her loved ones, including a son who is finishing high school. Himes' wife is still trying to sell their house, and he already missed key moments of his son's senior year.

"We'll learn to adjust as the months go on and everything, but it will never be the same," said Hudak, whose husband joined her in Tennessee. "My parents, my in-laws, I mean, everybody is in Ohio."

The cutbacks at Lordstown, a community of 3,000 people about halfway between Cleveland and Pittsburgh, are part of a larger shift at GM toward making trucks and electric and self-driving vehicles.

The move set off a political back-and-forth between Trump and Democrats, with the president telling GM several times to reopen or sell the plant, which sits in the industrial Midwest that was vital to his election in 2016 and could play a similar role in 2020. But Democrats say Trump has done little in recent months to push the automaker to save jobs at Lordstown.

The once-bustling factory had been the biggest manufacturing anchor remaining in what once was Ohio's manufacturing core. But those days are long gone. Unemployment in the two counties surrounding the plant is about 6 percent, well above the national average.

Salvaging any jobs could be hailed as a victory for Trump, but the workers and families whose lives have been upended in the meantime don't see it that way.

"No matter what they do, it's never going to be the same. There are people who moved and sold their houses. We're forever changed in Lordstown," said Tiffany Davis, a fifth-grade teacher whose husband, Tom, transferred to GM's plant in Bowling Green, Kentucky, while she stayed behind.

Three of the 18 students from her class last year have moved and more will be leaving to join their parents if GM sticks to its plan to no longer build cars in Ohio. That includes Davis and her two children.

"Unfortunately," she said, "we have to chase after the money."