The package delivery company was also buffeted by slower economic growth and the loss of business from Amazon.

David Koenig
In this file photo a FedEx delivery truck is loaded by an employee on the street in downtown Cincinnati.
AP Photo/John Minchillo, File

DALLAS (AP) — Profit at FedEx fell 11 percent in its fiscal first quarter, as the package delivery company was buffeted by slower economic growth and the loss of business from retail giant Amazon. The results fell short of Wall Street expectations, and the company lowered its forecast for earnings through next spring.

FedEx Corp. shares plunged nearly 10 percent in after-hours trading. The Memphis, Tennessee-based company said it would cut costs, including scaling back capacity in its express air-delivery network by retiring airplanes after the peak holiday season. The express unit is particularly affected by trade uncertainty.

FedEx is also raising prices. It announced Monday that it will raise rates on express, ground and home deliveries by an average of 4.9 percent starting January 6. Freight rates will rise 5.9 percent.

CEO Fred Smith said the company continues to be hurt by a weakening global economy "driven by increasing trade tensions and policy uncertainty." Smith said escalating tariffs and trade tension between the U.S. and China have lowered industrial production and hurt the international shipment of goods.

"We are reacting inside FedEx to these same things," he said. "As we went into the fiscal year (that started in June), we were hopeful of a trade deal and some sort of restoration of normalcy. That has not taken place." Smith said spending by U.S. consumers was masking weakness in production of goods, which is more global and played a big part in the soft beginning to FedEx's new fiscal year.

The company added that it was lowering its profit outlook for the rest of the fiscal year — through next May — partly because of the loss of ground-based shipments from a large customer. FedEx ended a contract with Amazon last month, having previously decided not to renew an air-shipping contract with Amazon.com Inc.

FedEx said it is finding other business to replace the Amazon volume that it believes will be more profitable. Its quarterly profit of $745 million was down from $835 million a year earlier. Excluding special items including expenses to fold European business TNT into its own, FedEx said it would have earned $3.05 per share. The average estimate of 10 analysts surveyed by Zacks Investment Research was for $3.17 per share.

Revenue was flat at $17.05 billion, also below analysts' forecasts. FedEx said it now expects full-year earnings of between $11 and $13 per share, excluding TNT integration costs and an accounting adjustment related to a pension plan. Analysts had been expecting $14.68 a share, according to FactSet. 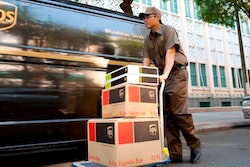