Of the 340 companies included in the analysis, only 19 were run by women. 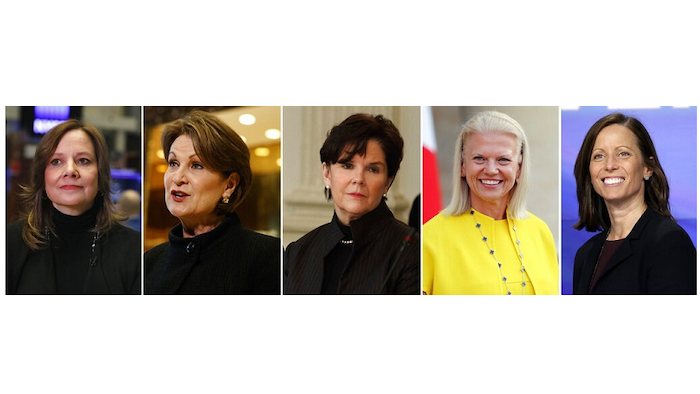 The few women who are CEOs of the largest U.S. companies typically make more money than their male counterparts but aren't close to the top of the leaderboard for pay packages.

The median pay package for female CEOs in the 2018 fiscal year was $12.7 million, compared with $11.2 million for men, according to data analyzed by Equilar for The Associated Press. That reflects a raise of $680,000 for the same group of female CEOs from a year before, versus a raise of $540,000 for the men. Median means half were larger, and half were smaller.

Still, of the 340 companies included in the analysis, only 19 were run by women. Plus, there is not a single woman on the overall list of the top 20 most highly paid CEOs. The top earner there — Discovery CEO David Zaslav — earned a pay package worth almost six times that of the most highly paid female CEO — Mary Barra of General Motors. She ranks 30th on the list overall.

Barra tops the list of female CEOs with a pay package valued at nearly $21.9 million, unchanged from the prior year. Lockheed Martin CEO Marillyn Hewson came in second with a compensation valued at $21.5 million, up 7% from the prior year. And General Dynamics CEO Phebe Novakovic rounded out the top three with a compensation package worth $20.7 million.

The AP's CEO compensation study, conducted by Equilar, includes pay data for 340 executives at S&P 500 companies who have served at least two full consecutive fiscal years at their respective companies and filed proxy statements during the traditional period of Jan. 1 to April 30.

While women enter U.S. companies at roughly the same rate as men, experts say their ranks grow thinner at each step up the corporate ladder. There are a number of reasons for this, including unconscious bias, lack of mentorship, people hiring in their own image and more. This leaves few women in the pipeline to take the top seat when the time comes.

Catalyst, a nonprofit organization that focuses on women in business, said that only three times in history has a woman succeeded another woman as chief executive at a public traded company.

"The rarity of these women, they are so exceptional," said Alison Cook, a professor of management at Utah State University who researches gender and diversity in the workplace. "Not that some of these men aren't exceptional also ... but these women have to be so incredible to have made it this far."

Comparing men's pay to women's as a group is a bit unfair, statistically speaking. The sample size is much smaller for women so any change among that group has an outsized impact.

Lorraine Hariton, CEO of Catalyst, said that while the numbers appear discouraging year over year, gains are being made in the long run.

Women are becoming slowly more prevalent in CEO roles and pay is gradually becoming more commensurate. For example, the recently released list of Fortune 500 companies includes more women than ever before, 33, but largely due to appointments made in the past 12 months, according to Fortune magazine. And women are also incrementally becoming more common on the boards of companies, which helps usher in more women to executive leadership.

"It's a gradual trend in the right direction but much slower than what we would like to see." Hariton said.

Hariton and Cook also both agree that the recent #metoo movement has helped raise awareness of the issue and brought more men into the conversation, in some cases spurring companies to look more closely and address their own practices.

"Companies need to address this not just because it is the right thing to do but to remain competitive," Hariton said. "Consumers are demanding it."

The Male/Female Divide in Tech