He took on a shop with eight employees, uncertain of the future and hoping to make a mark. 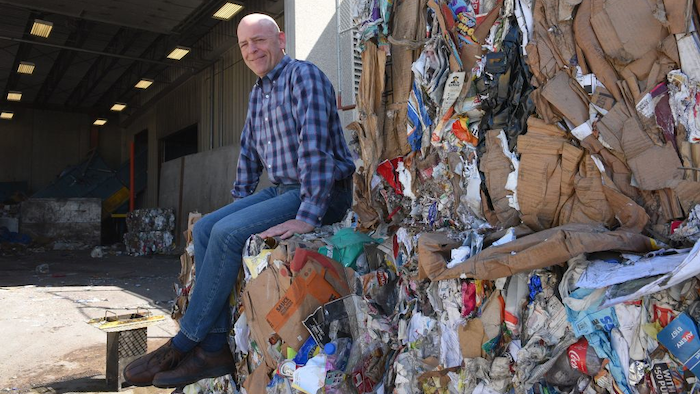 As recycling processors across the United States face ongoing problems in the global market, Millennium Recycling has built a solid foundation thanks to Jake Anderson's prudence, the company's willingness to embrace new technology and lessons learned during the lean years.
Patrick Anderson, Sioux Falls Argus Leader

SIOUX FALLS, S.D. (AP) — Jake Anderson kept the house he owned in the Twin Cities when he moved away to start his own recycling business.

After working in the industry for a Minnesota-based company, Anderson bought a small recycling company in Sioux Falls that had fallen on hard times and moved into a triplex in the center of the city.

He took on a shop with eight employees, uncertain of the future and hoping to make a mark.

Millennium Recycling Inc. is celebrating its 20th anniversary this year, having become a local leader in an industry filled with fluctuation and uncertainty, the Sioux Falls Argus Leader reported.

As recycling processors across the United States face ongoing problems in the global market, Millennium has built a solid foundation thanks to Anderson's prudence, the company's willingness to embrace new technology and lessons learned during the lean years.

"Too often, people have too short of a memory in this industry," the 47-year-old said.

The Sioux Falls-based recycler — known as a materials recovery facility in the industry — is still pulled by those market forces. The 20-year mark represents what Anderson called a "down time" in a business that ebbs and flows with market demands for papers, plastics and metals. But he and other company leaders have weathered worse storms and have built a business model designed for long-term success.

Millennium is using 2019 to instead celebrate its success and growth over the years, including being an innovator in South Dakota's recycling industry, being the first in the state to recycle consumer electronics, going on a trade mission to China with former Gov. Dennis Daugaard and launching the nonprofit Ecomaniacs, which provides recycling services to summer events.

Anderson was born into an entrepreneurial family. His father owned a liquor store, health clubs and other businesses during his childhood in Owatonna, Minnesota.

After working for years for a recycling company in the Minneapolis area, he was interested when he heard there was a small processor in Sioux Falls that was looking at either closing up shop or selling to a new owner.

He came with experience and expertise in a larger market, bringing ideas that were new to Sioux Falls. A lot of the work he did in his first year was focused on getting to know the community, its people and businesses.

Millennium's growth over the years is a testament to those relationships, Anderson said.

"We spent the first — probably — year trying to refine the operation," he said.

The company's northern Sioux Falls facility handles 3,500 to 4,000 tons per month compared to 150 to 300 tons per month it handled when Anderson bought the company. It employs about 30 people, not including the dozen staff members at Secure Enterprise Asset Management, a spin-off company that specializes in electronics recycling.

Relationships with the people and companies in the Sioux Falls area remain a strong focus for Millennium, which doesn't do residential hauling but still actively tries to educate the community about up-to-date best practices in recycling, Millennium President Shannon Dwire said.

"We always have some level of support out there," she said.

Millennium's single-stream recyclable sorter runs like a backbone through its plant. It's also a backbone of the business itself.

The decision to buy and install the sorter was a defining moment for Millennium.

The equipment changed the company as much as it changed how hundreds of thousands of people in the Sioux Falls area recycle, allowing them to combine papers, plastics, glass bottles and cans in one bag and not worry about the logistics of separating everything out again.

That all happens at Millennium now. Recyclables running through the sorter are separated and belted off to different parts of the plant, where they are bailed and packed with like materials. Only about 3.5% of the stuff that comes in can't be recycled.

Anderson spent years researching the game-changing technology before deciding to invest, but was pressured by conversations with Waste Management, which had already altered the industry landscape by allowing consumers to mix recyclables.

But the national chain didn't have the technology in smaller secondary markets such as Sioux Falls to sort recyclables and was losing money by having an ancillary operation in the city.

But it was clear the industry was going in a new direction. If Millennium didn't move to single-stream sorting, there was a chance another company would one day take its place, Anderson said.

"It was the equivalent of an all-in play for us," he said. "We spent a painstaking amount of time just trying to pencil this out."

Millennium bought and went through the first phase of installing the technology in 2007.

And then the Great Recession hit.

The fallout of the economic downturn left Millennium floundering with an oversupply of recycled materials and minimal demand from buyers such as the paper mills who rely on processors for product.

Millennium had gone into debt as much as the bank would allow, and Anderson started meeting with attorneys about bankruptcy.

And then, at the wire, business started to rebound, Anderson said.

"All of a sudden, we started to get orders," he said.

It took about two years for Millennium to catch up to where it was before the recession, but company leadership left the experience having learned a number of important lessons.

Perhaps the most important was clarity on the realities of the industry. There will be good times and bad times, and Millennium doesn't take anything for granted.

"You use your good markets wisely," Dwire said. "Even when things are running well, you look for efficiencies."

China sparked incredible growth in the U.S. recycling industry in 1999 when it opened massive paper mills subsidized by the government. The buoying of the industry was felt all the way in Sioux Falls, where Anderson was just starting to build Millennium into a bigger, more commercially-focused recycler.

China dominated the market, becoming the biggest buyer of America's recycled goods. While recycling processors benefited from Chinese demand, paper mills in the U.S. started a process of acquisition and consolidation to compete, eventually closing plants across the country, especially in the coastal states.

The, with domestic demand for recycled goods weakened, China started limiting waste imports. China's new policy, dubbed "Green Fence," was a solution to the country's increasing problems with pollution, but Anderson believes the restrictions on imported recycling products were painting with too big of a brush.

Then, in 2018, China upped the ante with an even stricter policy called "National Sword." It was basically a list of outright bans on materials, including imported recyclables.

But the loss of North American paper mills during the boom years of Chinese demand has now left the entire industry scrambling for solutions, Anderson said. That includes Chinese investment in some of the closed U.S.-based paper mills.

M illennium, with its strong ties to the region, isn't directly affected by China's policies. About 90% of its recycled material is sold to buyers in the Midwest.

None of the current stress caused by the global market compares to what Millennium has already survived.