The potential buyer warned this year that it might not have enough money to stay in business. 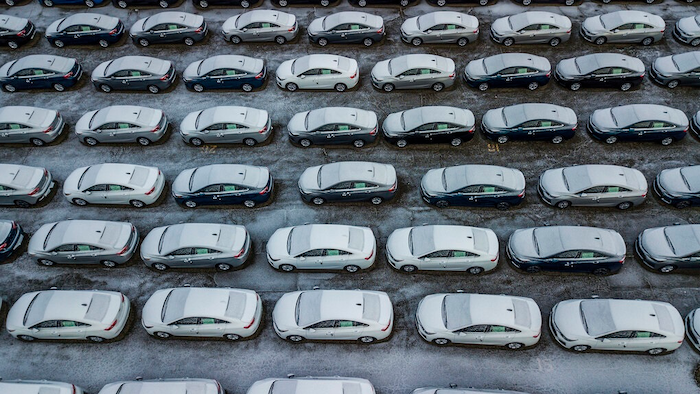 In this Dec. 5, 2018 file photo, hundreds of Chevrolet Cruze cars sit in a parking lot at General Motors' assembly plant in Lordstown, Ohio. A potential deal to sell the shuttered General Motors plant is still leaving the factory with an uncertain future. In May 2019, GM confirmed that it’s negotiating the sale of the massive assembly plant.
Andrew Rush/Pittsburgh Post-Gazette via AP, File

The fate of a shuttered General Motors plant in Ohio remains very much up in the air even after a tweet from President Donald Trump heralded the potential sale of a factory he has shown an intense interest in saving.

That's because the buyer is a fledgling electric vehicle maker that has never posted a profit, has only about 100 employees and warned this year that it might not have enough money to stay in business.

What the potential deal does signal is the likely end of a half-century of car manufacturing for GM at its factory near Youngstown and continued uncertainty for a battered Rust Belt community that has seen plenty of empty promises.

GM confirmed this past week that it's negotiating the sale of its massive assembly plant in Lordstown, where production ended in March as part of a major restructuring for the automaker.

Cincinnati-based Workhorse Group intends to make a commercial electric pickup truck at the facility. Its only production plant is in Union City, Indiana, where it has built about 400 delivery trucks.

It has started supplying UPS with electric vehicles and is one of five companies competing to land a $6 billion contract to make a new generation of mail trucks for the U.S. Postal Service.

But there are major questions about its financial footing.

Workhorse has poured most of its money into research and development, with limited sales, losing $36.5 million last year. It warned in its most recent quarterly filing that it didn't have enough money to pay for its operations through the first half of this year and needed additional financing to stay afloat.

But the publicly traded company, whose stock soared after Trump's tweet , also said it believes it can raise enough money to keep going.

Still, it doesn't yet appear to have backing like one of its competitors, Rivian, which just got a $500 million investment from Ford to develop a new electric vehicle.

The plan Workhorse laid out this week is for it to be a minority investor in a new entity that would own the Lordstown plant. No other investors have been announced, and it's still looking for partners.

GM spokesman Jim Cain said it was too early to tell whether the automaker would be one of them. GM sees the startup as a way to preserve the Lordstown plant and thinks Workhorse has the technology and a product to build there, Cain said.

Tesla Inc. and other startup companies were small businesses at one time, he pointed out.

If Workhorse does begin production there, it would likely start out with a few hundred workers, far less than the 4,500 people GM employed just two years ago before it began cutting shifts.

Democratic Rep. Tim Ryan, whose district includes the plant, said a sale won't help GM workers in the area who would need to transfer if they want to keep their pension and benefits with the automaker.

Any long-term job growth for the region would be years away, he said, but "it's better than the plant being empty."

Trump has repeatedly called on GM to find another owner or reopen the plant, which is in an area of the state that will be important to him in the 2020 election and where he has promised a revival of manufacturing jobs.

Some GM workers in Lordstown who have been holding out hope the automaker would reopen the factory with a new vehicle to build there were skeptical about the new plans.

Since the area's steel mills began closing in the 1970s, investors have come into the Mahoning Valley pledging to build factories that would make blimps, commuter airplanes and a new version of the Studebaker, said Tim O'Hara, who worked at the Lordstown plant for 41 years.

"Nothing ever came of it," he said. "We've been through this in the valley. We've had these false promises. We're kind of used to it, at least we should be."

O'Hara, who is vice president of the United Auto Workers local at the plant, noted that any sale still needs to be negotiated during upcoming contract talks with the union, which still wants GM to stay and keep the plant open.

"We're telling our members to hope for the best, prepare for the worst," he said.

Republican Gov. Mike DeWine, who has called for GM to sell the plant if it doesn't intend to keep it running, said it was too early to celebrate because many details must still be worked out.

"If things are not in place for this to happen," the governor said, "this would be very cruel to the workers and the people in Lordstown and the Mahoning Valley."