In the early 1940s, Wisconsin led the country in the production of hemp. At one point during World War II, the state had 42 hemp mills. 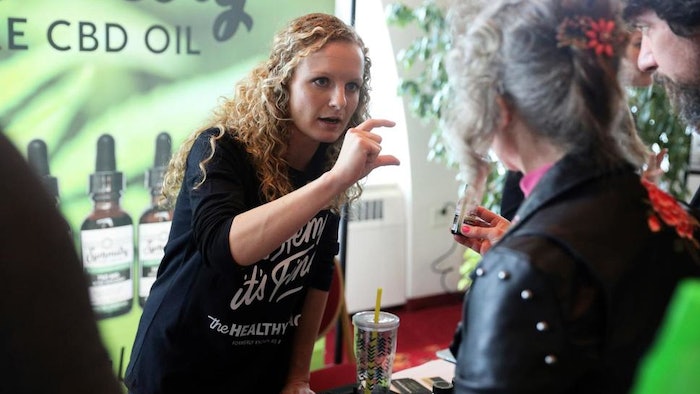 In this April 7, 2019 photo, Lindsey Bouras, left, wellness consultant at The Healthy Place, formerly known as Apple Wellness, talks to an attendee about CBD oil at the, It's Hemp, It's Fine hemp/CBD event, at Monona Terrace Convention Center in Madison, Wisc. The event featured a panel discussion, informational booths, and free samples of CBD coffee, beer, kombucha, candy and more.
Coburn Dukehart/Wisconsin Center for Investigative Journalism via AP

MADISON, Wis. (AP) — When Abbie Testaberg married her husband, Jody, in 2010, she told him to quit his job. He had been working for a medical marijuana cooperative in California when the couple met in Wisconsin.

"I wanted him to forget what he was good at and passionate about and get a real job and we could move on with our lives," Testaberg said.

For a while, the Testabergs and Abbie's mother ran a cafe in River Falls, Wisconsin. The couple had two sons, both born with congenital disorders.

"Thinking about alternative healing and wellness options for my kids opened me to the realities of medical cannabis, which my husband already knew," Testaberg said. "On the journey, so far, my biggest interest is better understanding the plant and the endocannabinoid system to consider how my children may benefit."

Now, Testaberg has devoted her career to cannabis, and to the production of one form of the plant — hemp — which recently was legalized in Wisconsin.

Testaberg is an authorized hemp grower and processor in Wisconsin, which launched an industrial hemp pilot program in 2018 and now has more than 2,100 applications for licenses in 2019.

Hemp is a member of the cannabis sativa plant family — the same family as marijuana. The plant looks essentially the same but has been bred to contain less than 0.3% of THC, the chemical that causes the "high" in marijuana. In comparison, marijuana seized by federal officials averages about 12% THC.

Some hemp license holders are growing the plant now in anticipation of legalization of marijuana in Wisconsin, which is gaining support from Democratic Gov. Tony Evers and a growing numbers of lawmakers. But GOP leaders who run the Legislature plan to strip decriminalization and medical marijuana legalization from Evers' budget.

In the early 1940s, Wisconsin led the country in the production of hemp. At one point during World War II, the state had 42 hemp mills.

Wisconsin's climate and "diverse" farming industry make it an ideal environment for growing hemp, according to Irwin Goldman, professor and chairman of the University of Wisconsin-Madison Department of Horticulture.

"We obviously have a big dairy industry, but we also grow a lot of fruits and vegetables, we have forages to feed the dairy animals, we have lumber for paper," Goldman said.

In 1970, industrial hemp got swept into the federal Controlled Substances Act along with marijuana and became a Schedule I drug. This effectively placed a ban on growing the crop in the United States for nearly 50 years.

Farmers in Wisconsin started planting hemp again in May 2018, after Act 100 authorized a pilot program overseen by the state Department of Agriculture, Trade and Consumer Production (DATCP).

That legislation, passed on a unanimous vote, was made possible by the 2014 Federal Farm Bill, which ended the decades-long ban on hemp.

Modern day hemp has numerous uses, including fiber products, building materials such as drywall, paper, biofuel, food such as cereal and bread, cosmetics — even jeans. The top use for hemp in the United States is for cannabidiol, or CBD, a non-intoxicating substance used for a variety of medical conditions.

State Sen. Patrick Testin, R-Stevens Point, who was the lead sponsor of Act 100, sees hemp as a way to support Wisconsin farmers. In 2017, there were $820 million dollars in hemp product sales in the United States. The Hemp Business Journal estimates this will grow to $1.9 billion by 2022.

"This is an opportunity for us to reintroduce a crop that we once led the nation in, to help our farmers raise up their margins but more importantly, the research and innovation is going to open the door here in the state of Wisconsin," Testin said. "I am thoroughly convinced . that within the next five to 10 years, Wisconsin is going to be the national leader in industrial hemp again."

The Testabergs were among the first 135 growers to plant seeds last year in Wisconsin. In 2018, a total of 1,850 field acres and 22 greenhouse acres were planted statewide, according to Jennifer Heaton-Amrhein, a policy analyst at DATCP.

Applications to grow and process hemp have grown dramatically for the program's second year — over 2,100 people have applied for the licenses this year. Evers has recommended adding five full-time positions and an additional $300,000 to support the program in his 2019-21 budget.

The program is supported in part by fees, including a one-time $150 license fee, $350 annual registration and $250 annual sampling cost.

Before harvest, DATCP tests the plant for its THC content; anything above 0.3% is considered marijuana, and the state orders it to be destroyed. Additionally, participants must pass a background check. Anyone with a felony drug conviction is banned from the program.

Wisconsin officials are striving to update state regulations to conform to the 2018 Federal Farm Bill.

"The only constants in the industrial hemp program are change and ambiguity," Heaton-Amrhein said. "There are a lot of gray areas, and the reason is that there is this merging of federal laws and state law, and they're not necessarily consistent."

Many of these inconsistencies are addressed in Senate Bill 188, known as "Hemp 2.0" or the Growing Opportunities Act, a bipartisan bill that Testin introduced on April 30. The bill would redefine marijuana to exclude hemp and remove THC found in hemp from the controlled substances list, among other provisions.

These legal ambiguities had real consequences for the Menominee Indian Tribe of Wisconsin. After the 2014 Farm Bill allowed states to implement industrial hemp research pilot projects, the tribe voted to create its own in 2015.

Marcus Grignon and other Menominee tribal farmers planted industrial hemp on about 3 acres of the reservation in northeastern Wisconsin. On Oct. 23, 2015, the U.S. Drug Enforcement Administration raided the farm and destroyed the 33,000 plants.

The tribe sued the federal government, arguing its program was legal under the 2014 federal legislation. But a judge disagreed, saying the law only applied to state-run hemp programs. Grignon has since enrolled in Wisconsin's industrial hemp program.

CBD accounts for 23% of the hemp-based product sales in the United States in 2017, the Hemp Business Journal said.

Growing hemp for grain or fiber and growing for CBD are different processes, said James Jean, the business developer at Legacy Hemp, a company that works with farmers in Wisconsin, Minnesota and North Dakota.

CBD plants require more hands-on labor and are often grown indoors. They also can be much more expensive. Seeds can cost between $1 and $5 each, while grain and fiber seeds can run $4 a pound.

Farmers stand to make a high income from producing CBD — but it can be risky, in part because infrastructure for processing and selling hemp is still developing in Wisconsin, Jean said.

"We believe that market bubble is going to pop, because everybody is jumping into the game right now," Jean said. "If you don't have a buyer and contract on paper going into it, it's going to be a scramble at the end of the season to get the yield and the cash flow that people are expecting."

Another risk in growing hemp for CBD is the possibility that the crop will be above 0.3% THC. This happened to 21 of 295 samples in Wisconsin last year, including one of Testaberg's. She had to destroy a small amount of her crop that tested "hot."

Almost all CBD varieties will go above 0.3% at some point of the season, Heaton-Amrhein said. This depends partly on the genes of the seed, and DATCP has banned the use of one variety. Farmers are responsible for testing the crop regularly and harvesting at the right time to ensure their crop is under 0.3%, she said.

The University of Wisconsin-Madison is researching how THC levels vary in hemp to determine how farmers can avoid having to destroy crops.

On a Sunday morning in April, nearly 500 people attended It's Hemp, It's Fine, billed as Madison's first-ever hemp/CBD expo. Attendees could test CBD in products from chocolate to cocktails. Besides the samples, a local CBD retailer sold a bottle of pills for $60 and $380 for up to 2 ounces of tincture.

Jeff Oler and his daughter, Elizabeth Pierson, are newly enrolled in Wisconsin's hemp program. Both use CBD and plan on growing CBD-rich hemp on 1 acre of land near Richland Center. Oler waited to join the program until the second year — he wanted to see what happened during the first year before investing.

But they have faced difficulty in finding and connecting with other growers, processors and buyers because the state keeps the names of hemp license holders confidential.

The legality of CBD depends on how it is marketed. If companies are just bottling it up and selling it, that is legal. But if they are marketing it as a cure to any sort of aliment, it is not legal. Still, it is hard to enforce, and Heaton-Amrhein said it is "the wild, wild West out there" when it comes to CBD.

Products claiming to be CBD have turned out to have no CBD or above the 0.3% THC concentration limit, Testin said. The new bill would prohibit the mislabeling of hemp products.

Testin said some participants in the hemp program are learning to grow the plant because of its similarity to marijuana. The Republican senator said he is "not there yet" on legalization of recreational marijuana, but is exploring options for the legalization of medical marijuana.

"But," he added, "there are a number of my colleagues in the Senate who are not supportive of any form of either medical or recreational, so it is going to take some time."

The nonprofit news outlet Wisconsin Center for Investigative Journalism provided this article to The Associated Press through a collaboration with Institute for Nonprofit News.