The company said it would spin off its division that makes power turbines to increase its entrepreneurial freedom. 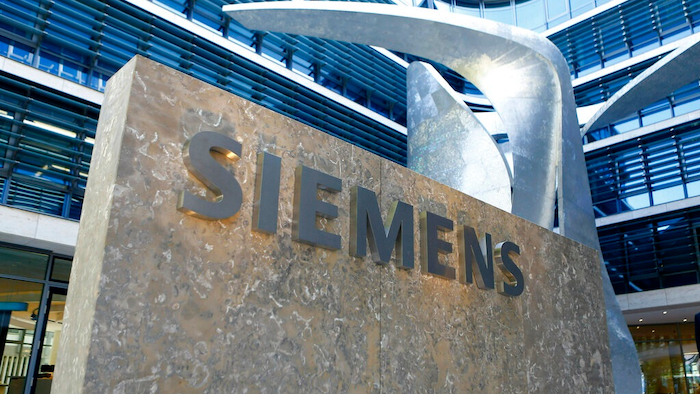 This June 24, 2016 file photo shows the logo of German industrial conglomerate Siemens at the new headquarters in Munich, Germany. German industrial equipment maker Siemens said Tuesday May 7, 2019, it will cut some 10,000 jobs in a major restructuring that will involve spinning off its oil, gas and power generation business and creating new areas of growth.
AP Photo/Matthias Schrader, file

FRANKFURT, Germany (AP) — German industrial equipment maker Siemens says it will cut some 10,000 jobs in a major restructuring that will involve spinning off its oil, gas and power generation business and creating new areas of growth.

News of the moves to increase profitability and address the struggling power business sent the company's share price up 4.6% to 107.30 euros ($120.20) in morning trading in Europe on Wednesday.

The company said it would spin off its division that makes power turbines to increase its entrepreneurial freedom, while embarking on a sweeping cost-cutting effort at its remaining operations.

The gas and power division has been under pressure due to a broader trend toward renewable energy such as sun and wind power. Competitors in the power business such as Boston-headquartered General Electric and Japan's Mitsubishi have struggled as well.

Siemens said in the announcement late Tuesday that it would keep a significant stake of less than 50 percent in the spun-off company and would bundle in a majority stake in its renewable energies company. That would create what Siemens CEO Joe Kaeser called "a powerful pure play in the energy and electricity sector" that could offer products across the entire scope of the energy market from a single source.

The company plans to take out 2.2 billion euros in costs by 2023, in the course of which it will drop some 10,400 positions. The company says it expects growth to create some 20,500 new jobs by 2023, for a net gain of around 10,000. When it comes to job cuts, Siemens said that "all measures worldwide are to be implemented in as socially responsible a manner as possible."

Siemens AG said Wednesday that its net profit fell to 1.92 billion euros ($2.15 billion) in the first three months of the year, from 2.02 billion a year earlier, when earnings were boosted by 900 million euros by a share transfer. Revenue rose 4% to 20.93 billion euros.