The company attributes the fall to expenses for severance and higher tax. 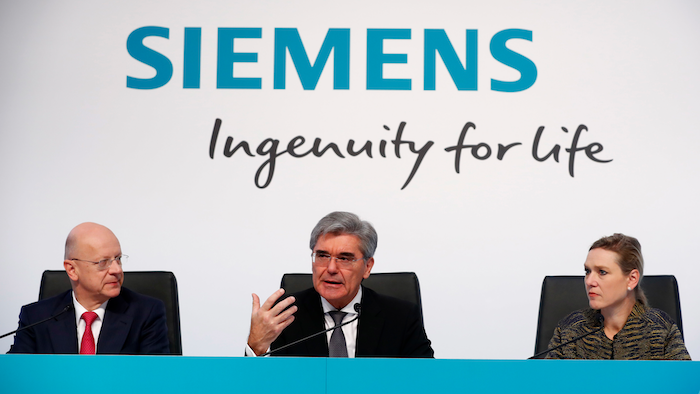 FRANKFURT, Germany (AP) — Industrial equipment and technology company Siemens says its net profit fell 46 percent in the most recent quarter due to expenses for severance and higher tax.

Despite that retreat, the company, which makes trains, power turbines and factory automation, said Thursday that it had met its fiscal-year goals and was facing a favorable market environment.

The Munich-based company said its net profit decreased to 681 million euros ($777 million) from 1.25 billion euros in the year-earlier quarter. Revenue rose 2 percent to 22.6 billion euros while orders were flat at 23.7 billion euros.

It also said it met its targets for the year at the end of the quarter, the company's fiscal fourth. And it proposed to raise its dividend by 10 cents to 3.80 per share and announced a new 3 billion-euro share buyback program to run through 2021, coming on top of an earlier buyback of the same value that had run since 2015.

Siemens AG saw 301 million euros in severance costs at its power and gas unit, which suffered an operating loss of 139 million euros due also to sales and price declines. The company's bottom line was also hit by higher tax costs at its train-building unit, which is in the process of merging with French train-maker Alstom.

May 8th, 2019
Latest in Product Development