Tesla Sued by Family of Man Killed in Crash

The software engineer died after his Tesla SUV crashed on a Northern California highway. 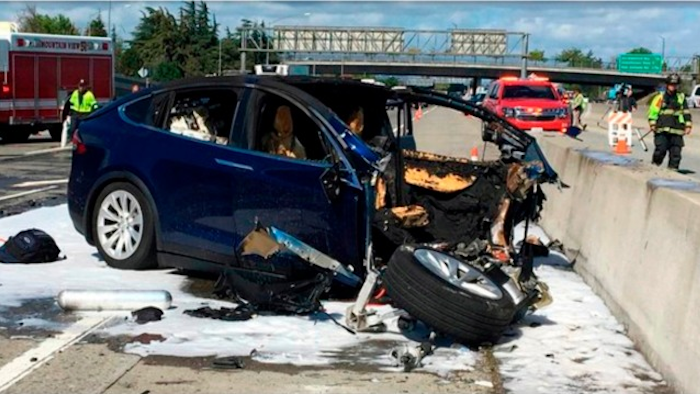 In this March 23, 2018, file photo provided by KTVU, emergency personnel work at the scene where a Tesla electric SUV crashed into a barrier on U.S. Highway 101 in Mountain View, Calif. Federal investigators say the Tesla using the company’s semi-autonomous driving system accelerated just before crashing into a California freeway barrier, killing its driver. The National Transportation Safety Board issued a preliminary report on the crash on Thursday, June 7.
KTVU via AP, File

SAN JOSE, Calif. (AP) — The family of a software engineer who died after his Tesla SUV crashed in a Northern California highway has sued the automaker.

The lawsuit filed in a Santa Clara County says the autopilot navigation system caused the crash on Highway 101 that killed Walter Huang near Mountain View in Silicon Valley last year.

Huang's widow, Sevonne Huang, and his family also sued the state's Department of Transportation for not maintaining the highway.

The California Highway Patrol said Walter Huang was traveling south in the carpool lane when the Tesla crashed against a freeway barrier. The crash caused a fire. Rescuers were able to free him, but he died later at a hospital.

The family's attorney, B. Mark Fong, said Wednesday they are suing to help prevent "this tragedy from happening to other drivers using Tesla vehicles."