The NTSB says the car didn't brake at all before the crash. 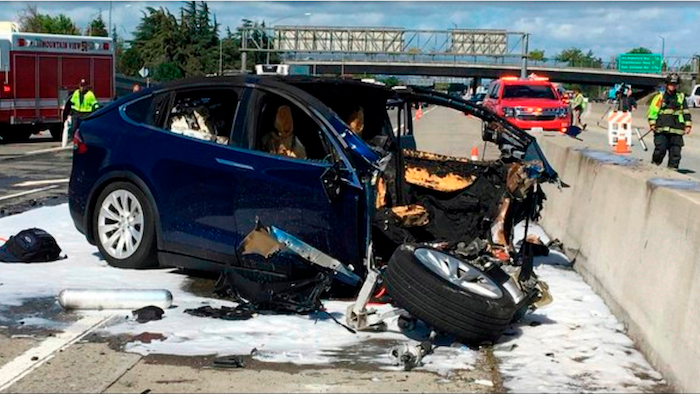 In this March 23, 2018, file photo provided by KTVU, emergency personnel work at the scene where a Tesla electric SUV crashed into a barrier on U.S. Highway 101 in Mountain View, Calif. Federal investigators say the Tesla using the company’s semi-autonomous driving system accelerated just before crashing into a California freeway barrier, killing its driver. The National Transportation Safety Board issued a preliminary report on the crash on Thursday, June 7.
KTVU via AP, File

The National Transportation Safety Board, in a preliminary report on the March 23 crash, also said that data shows the Model X SUV did not brake or try to steer around the barrier in the three seconds before the crash in Silicon Valley. The NTSB says it now will examine the cause of the crash.

Tesla wouldn't say if the system performed as designed. A spokeswoman referred to a company blog saying that a Tesla with Autopilot is far safer than vehicles without it. The blog says Autopilot does not prevent all crashes but makes them less likely.

The crash on U.S. 101 killed the driver, Walter Huang, 38, an Apple software engineer.

In the report released Thursday, the NTSB said the SUV was operating with traffic-aware cruise control and autosteer lane-keeping assistance engaged at the time of the crash. The cruise control maintains a set distance between the cars and traffic in front of them. The SUV also was equipped with automatic emergency braking, which is always on in Tesla vehicles unless customers deactivate it by taking several steps on the vehicle touch screen.

Eight seconds before the crash, the SUV was following a vehicle and traveling about 65 mph. A second later, the SUV began a "left steering movement" while still following the other vehicle. Four seconds before the crash the Tesla wasn't following a vehicle any more. A second later it accelerated from 62 mph to 70.8 mph "with no pre-crash braking or evasive steering movement detected," the report said.

When the SUV moved to the left, it entered a triangular "gore area" that is marked with white lines and divides the freeway lanes from an exit ramp. Then it hit the barrier, which was equipped with an accordion-like device to absorb impact in a crash. But that device had been damaged in a previous crash on March 12.

It likely will take more than a year to determine what caused the crash, NTSB spokesman Christopher O'Neil said Thursday. Among other factors, investigators are trying to determine how the car's camera, radar and ultrasonic sensors were working and what they were tracking.

"The focus isn't Tesla's technology," he said. "The focus is on what led to this crash and how do we prevent it from happening again."

Tesla's system may have a problem spotting or stopping for stationary objects. Federal agencies are investigating two other crashes in which Teslas ran into stopped fire department vehicles.

In January, a Tesla Model S sedan that may have been using Autopilot hit a parked firetruck on Interstate 405 near Los Angeles. The driver told authorities the Autopilot was working at the time. The firetruck was unoccupied and no injuries were claimed by anyone at the crash scene, authorities said. NTSB, along with the National Highway Traffic Safety Administration, a regulatory agency that can seek recalls and fine automakers, are investigating that crash.

NHTSA also is looking into a May 11 crash involving a Tesla Model S near Salt Lake City. Autopilot was in use when the car hit a stopped fire department truck. The driver of the vehicle told police she thought the Tesla's automatic emergency braking system would detect traffic and stop before the car hit another vehicle.

A Tesla spokeswoman pointed to passages in the company's owners' manual warning that automatic emergency braking is designed to reduce severity of a crash and isn't designed to avoid a collision. It also may not work all the time, the manual say. "It is the driver's responsibility to drive safely and remain in control of the vehicle at all times," it says. "Never depend on Automatic Emergency Braking to avoid or reduce the impact of a collision."

In the Mountain View-area crash, the NTSB also is investigating fires that broke out in the SUV's batteries after the crash. Firefighters initially extinguished a fire on the freeway, but several hours later at an impound lot, the battery was giving off smoke. No fire was detected by thermal imaging equipment. Five days after the crash the battery reignited and firefighters put it out again.