Norwood Jewell said he inherited a "culture of corruption" at the training center. 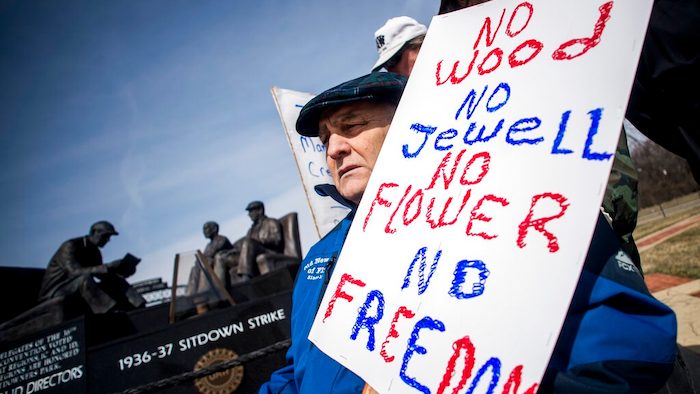 Genesee County Clerk-Register John Gleason protests alongside a dedicated handful United Auto Workers retirees during a protest against former UAW 1-C Director Norwood Jewell, Tuesday, April 2, 2019 at Sitdowners Memorial Park in Flint, Mich. Jewell is expected to enter a plea agreement Tuesday, on charges related to misuse of union workers' training funds. The retired UAW workers who protested are asking for all mentions of Jewell's name to be removed from the park.
Jake May/The Flint Journal via AP

DETROIT (AP) — A former labor leader pleaded guilty Tuesday to conspiring to enrich himself and others by having Fiat Chrysler pay for meals, golf and other perks, although he tried to soften his conduct by claiming it was due to bad bookkeeping decisions.

Norwood Jewell, who suddenly retired last year as a vice president at the United Auto Workers, is the highest-ranking labor official charged in a scheme to tap cash from a job training center in Detroit that was financed exclusively by Fiat Chrysler, known as FCA.

Jewell acknowledged in court that he "wasn't perfect" and wasn't entitled to anything from FCA. But he tried to explain away his conduct by saying he simply had failed to earmark certain expenses to the UAW.

"This lack of apportionment of funds clearly violated" federal law, he said in the 20-page plea agreement.

The agreement lists $60,000 in meals and golf, including fine dining at Detroit's exclusive London Chop House, all paid with training center credit cards. Jewell said there sometimes were dozens of people at the restaurant.

The document also states that Jewell used a credit card and approved the use of cards by other UAW officials for more than $40,000 in personal purchases for himself and the others.

The corruption occurred during a period when the UAW and FCA were negotiating labor contracts, although Jewell insists his strategy during 2015 talks wasn't affected.

He said he never intended to aid FCA or harm thousands of auto workers represented by the UAW. Jewell said he inherited a "culture of corruption" at the training center when he was assigned to the union's FCA department in 2014. His late predecessor, General Holiefield, had a $262,000 mortgage paid off.

"A man gets put in a cesspool. He was destined to fail," defense attorney Michael Manley told reporters.

Federal prosecutors said they wouldn't seek more than a 15-month prison sentence when Jewell returns to court on Aug. 5.