The city already is taking steps to ensure it can provide enough skilled workers for Fiat Chrysler's new 6,500-job investment. 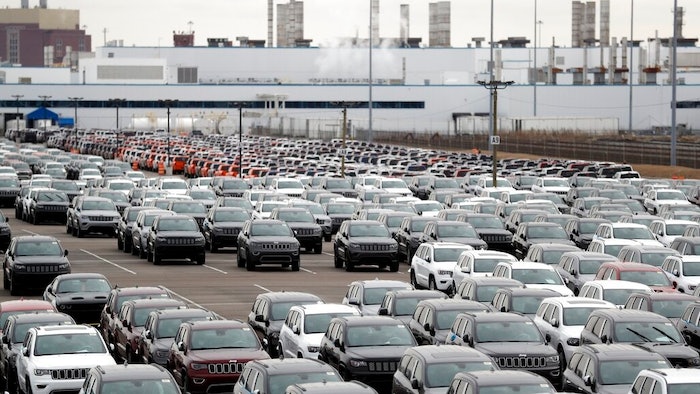 Jeep vehicles are parked outside the Jefferson North Assembly Plant in Detroit, Tuesday, Feb. 26, 2019. Fiat Chrysler announced plans on Tuesday for a new Jeep factory, the city's first new auto plant in a generation, as part of a $4.5 billion manufacturing expansion in southeast Michigan. FCA said it would convert the Mack Avenue Engine factory to an assembly plant for the next-generation Jeep Grand Cherokee and make an investment at Jefferson North Assembly Plant to retool and modernize the factory for continued production of the Dodge Durango.
AP Photo/Carlos Osorio

DETROIT (AP) — Fiat Chrysler Automobiles this week announced a $4.5 billion investment that would bring 6,500 new manufacturing jobs to Detroit and its suburbs and, nearly two years before the first new vehicles will even roll off the line, the city already is taking steps to ensure it can provide enough workers with the needed skills.

Detroit's economy was once dominated by automotive manufacturing, but since the industry's gradual migration from the metro area it has suffered among the highest poverty and unemployment rates in the country. Not long ago, Detroit was struggling to provide basic services, culminating in bankruptcy in 2013. Providing job training then would have been a tall order.

But in its recovery, the city has overhauled its training programs and slowly built a track record for preparing people for specific jobs.

"We're not starting from scratch," Jeff Donofrio, the city's executive director of workforce development, said Wednesday, a day after the Italian-American automaker announced its plan . "We want to make sure we're prepared for all the ... jobs that will come to the city as a result of the investments."

The city works with two high schools, a community college and a workforce development organization, in partnerships with the auto union and companies, to tailor training programs for positions in manufacturing, construction, information technology and health care.

Detroit worked closely with global auto parts supplier Flex-N-Gate to ensure Detroiters were handed jobs when the company last year opened a plant in what officials described as the largest investment in the city in two decades. The city and company developed customized training with the nonprofit Focus: Hope, which prioritizes workforce development and education.

"About 250 individuals went through that training and a vast majority were hired by Flex-N-Gate," Donofrio said.

With tax breaks and land acquisitions still to be hammered out, Fiat Chrysler's specific workforce needs have yet to be revealed. But Donofrio insists that the city has a growing force of eligible workers: Detroit last year enrolled about 2,500 people in training leading to a credential for a specific job, up from about 700 two years earlier.

Some prospective FCA jobs could be offered to laid-off Fiat Chrysler workers or those already working for the company on a temporary basis, and United Auto Workers officials say many of them are already in Detroit.

Fiat Chrysler said it will invest $1.6 billion to reopen a shuttered engine plant and convert another in the same complex into an assembly plant for the Jeep Grand Cherokee and a new, three-row, full-size Jeep SUV. That would create about 3,850 jobs.

All told, the investment would roughly double FCA's hourly workforce in Detroit.

The prospect of training — and a job in Detroit with an expected average wage of about $58,000 a year — entices Ladale Moore. The 22-year-old Detroiter with a 10-month-old son said he was laid off a couple of months ago from his job as a Hi-Lo driver. He has worked in manufacturing since he was 18.

"I've never had a job in the city, they've all been in the suburbs. They tend to pay more and the benefits are a lot better," said Moore, whose uncle, Fred Borden, works at Fiat Chrysler's Jefferson North plant, slated to get 1,100 new jobs in the multi-plant investment.

"Right now, with what's going on with Fiat Chrysler, that's going to be a big thing for the city of Detroit," Moore added.

While it's early, Detroit and Fiat Chrysler appear to be laying the right groundwork after significant struggles, according to Marina Whitman, a retired professor of business and public policy at the University of Michigan and a former General Motors chief economist. Chrysler and GM weathered their own bankruptcies a decade ago.

Whitman doesn't see any cautionary tale arising from the recent decision by Amazon to cancel plans for a secondary headquarters in New York, spiking some 25,000 promised jobs. The online retailer ran into fierce political opposition to promised tax incentives, not, as Whitman notes, issues with availability of a trained workforce.

"You've got this city entity (in Detroit) that seems to be focusing in an intelligent way on the training question," she said. "And auto companies that after going through hell and high water, have finally figured out what they have to do to be successful."

The ability to begin with the end in mind might have been a long time coming, but Donofrio said that's the way training is focused now.

"We're trying to get away from the train and pray approach," he said.