Meanwhile, the company will invest $250 million in another facility in the state, 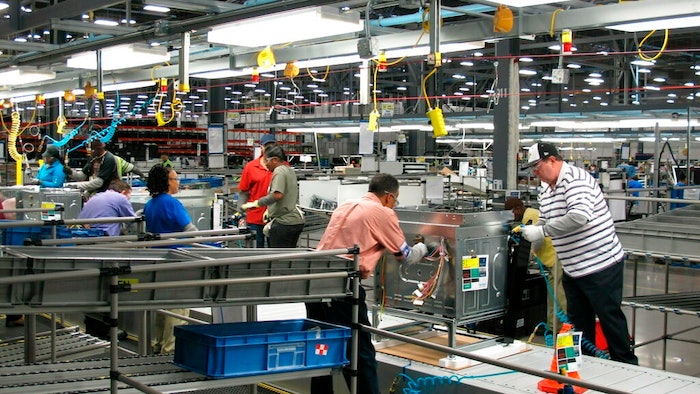 In this Thursday, Jan. 9, 2014, file photo, workers assemble ovens at the new Electrolux home cooking appliance factory in Memphis, Tenn. Electrolux says it is stopping production at its Memphis, Tennessee, factory while investing $250 million in a separate facility in the state. The Stockholm-based maker of Frigidaire products said Thursday that it is consolidating all U.S. cooking manufacturing into its facility in Springfield.
AP Photo/Adrian Sainz, File

MEMPHIS, Tenn. (AP) — Swedish appliance maker Electrolux said Thursday it plans to stop production within two years at its factory in Memphis, Tennessee, while investing $250 million in a separate facility in the state.

The Stockholm-based maker of Frigidaire products said it is consolidating all U.S. cooking manufacturing into its facility in Springfield, Tennessee. The company had said in March that it was putting its plant expansion in Springfield on hold, citing President Donald Trump's tariff announcement as the reason. Springfield is about 30 miles (about 50 kilometers) north of Nashville.

Electrolux said production at the Memphis facility is expected to continue through 2020. Buttressed by about $150 million in financial incentives from Memphis, Shelby County and the state of Tennessee, the company opened its Memphis factory in 2014 with the goal of producing 600,000 ovens annually, while employing 1,200 workers.

When it opened, the factory was viewed by local politicians as a long-term job producer. But critics decried the incentives, which came at a time when Memphis was experiencing budget problems.

"We are very committed to supporting our Memphis teammates and are announcing these changes two years in advance to provide transition time," Alan Shaw, head of Electrolux Major Appliances North America, said in a statement.

In a statement, Memphis Mayor Jim Strickland said he heard about the announcement in a news release "after being told a month ago that the plant wasn't closing." He said the decision to close the plant is "disappointing to say the very least."

"The State, County and City acted in good faith and made an unprecedented investment in this company and in Memphis," the mayor's statement said. "Just like they are exercising their option to leave, we will exercise our option to vigorously defend our investment."

The incentives included 800 acres (about 320 hectares) of free land, tax abatements and grants, the city said. Strickland is meeting with Electrolux officials Friday.

"The company's abandonment of Memphis will mean potential financial hardship for its employees and suppliers, and should result in more careful review of promises made by corporations about local job creation in the future," Cohen said in a statement.

The company's investment plans in Springfield, announced last January, included modernizing and adding 400,000 square feet (37,160 square meters) to the plant. But the expansion plans were put on hold after Trump's announcement of new tariffs on imported aluminum and steel.

The Electrolux announcement made no overt mention of the tariffs issue Thursday. It said in the statement that it is now moving forward with the expansion "in light of changing market dynamics, increased raw material costs and current trade policy."

Electrolux has said it is increasing investments to drive growth during the next three to four years. Production of cooking products is scheduled to begin during the fourth quarter of 2020 in Springfield, the company said. Expansion of its facility in Anderson, South Carolina, will include production of refrigeration products beginning this year, Electrolux said.

In addition to Springfield and Anderson, Electrolux also has factories in Kinston, North Carolina, and St. Cloud, Minnesota. The company has said it will be closing the St. Cloud plant by the end of this year, affecting about 900 employees.

Electrolux also said it is ceasing manufacturing of refrigerators at its plant in Santiago, Chile.

Electrolux Not Required Pay Back State