Ford made $3.68 billion for the full year, but that was only about half of what its net profit was in 2017. 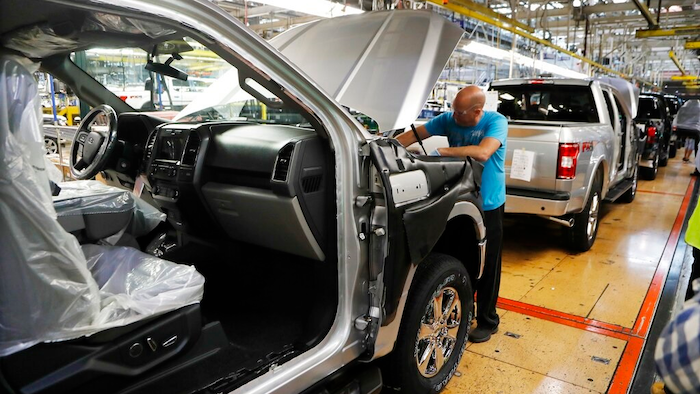 The loss included an $877 million one-time charge to revalue global pension assets due to a late-year market slide.

Ford made $3.68 billion for the full year, but that was only about half of what its net profit was in 2017. North America was its only profitable region.

"It's not a year that we were happy with," Chief Financial Officer Bob Shanks told reporters. "I think the fourth quarter kind of continued in that theme."

The annual and fourth-quarter performances sent company executives scrambling to explain to Wall Street analysts why it was taking so long to restructure and roll out new products that could increase sales and profits.

CEO Jim Hackett, who replaced the ousted Mark Fields in May of 2017, acknowledged frustration with the speed of Ford's $11 billion restructuring effort.

"It is what it takes to build an industrial model that we're talking about, to do it the right way, to not have it fall apart," he said on a conference call with analysts.

Shanks said the company has a good handle on its underperformance in China and Europe and said it is addressing problems. The company, he said, is trying to flatten its structure in the U.S. to eliminate layers of bureaucracy, and those efforts will finish in April. Cost savings from Europe should start showing up this year, he said.

Hackett said the company was slow to refresh its vehicles around the globe. "We were constipated in product development," he said, adding that Ford has updated its vehicles and propulsion systems while cutting costs.

Ford also is in the middle of a new product rollout largely in China and North America, and this month announced a restructuring of its European business that included layoffs and factory cuts. Redesigned vehicles coming in the U.S. this year include the Ford Explorer large SUV, the Ford Escape small SUV and the Ranger midsize pickup truck, all in growing segments of the market.

But because of an aging product lineup and the decision to start getting out of the sedan market as buyers switch to SUVs and trucks, U.S sales fell 3.5 percent last year. Ford lost 4 percentage points of market share for the year, yet its average sales price rose 14 percent to $40,746, according to the Edmunds.com auto pricing site.

Without one-time items, Ford's full-year profit was $1.30 per share, in line with the company's recent guidance but short of Wall Street's expectations. Analysts polled by FactSet expected $1.32 per share.

Also excluding one-time items, Ford posted a profit of 30 cents per share from October through December. That fell just short of analyst estimates of a profit of 31 cents.

But the automaker lost $1.1 billion before taxes in its Asia Pacific region including China for the full year. It also posted pretax losses of $398 million Europe for the year, $678 million in South America, and $7 million in the Middle East and Africa.

Revenue rose 2 percent for the year to $160.3 billion, topping Wall Street estimates of $155.77 billion on stronger prices that customers paid for Ford vehicles, the company said. Its pretax profit margin was 4.4 percent. The company predicts "potential improvement" in revenue and profit margins this year.

Without $3.3 billion in headwinds of tariffs and extraordinary recall costs including faulty Takata air bags, the company's performance in North America improved, Shanks said. The costs likely are not recurring, he said.

Ford's shares rose about 1 percent in after-hours trading Wednesday to $8.40.