Company Removes 'Made in China' Desks

The local company's higher bid was accepted based on the supply of U.S.-made furniture.

The (Greenville) Daily News reports that Custom Office Systems removed the unwanted desks — many of them faulty — on Monday from the Ionia County Courthouse. The Ionia-based company earlier this year delivered the desks in boxes clearly marked "Made in China" along with some American-made furniture.

County commissioners in April went with Custom's $41,862 bid over a rival's $33,739 offer based on the promise that the furniture would be made in the U.S. Commissioners demanded the Chinese-made furniture be replaced with American-made products, and in June voted to end Custom's contract and accepted the rival's bid.

Custom apologized and blamed the mistake on an oversight with its U.S.-based supplier. 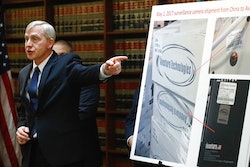