Chao Announces $1.5B in Infrastructure Grants

The grants are part of the department's BUILD infrastructure program and will fund road, rail and port projects.

WASHINGTON (AP) — The Transportation Department announced Tuesday that it will disperse $1.5 billion to fund 91 infrastructure projects around the country. Transportation Secretary Elaine Chao said the grants are part of her department's BUILD infrastructure support program and will fund road, rail and port projects in 49 states plus the District of Columbia.

Chao said her department received more than 850 applications for grants. Hawaii was the only U.S. state that didn't receive funding in this year's round of grants.

Chao praised the grant process as the successful product of bipartisan cooperation between congressional Republicans and Democrats. Infrastructure is seen as a potential area of agreement between the Trump administration and Democrats, who will take control of the House of Representatives in January.

Chao said infrastructure issues are "especially ripe for bipartisan cooperation." Boosting infrastructure spending was one of President Donald Trump's main campaign promises, but he's made little headway with a plan to invest $1.5 trillion in public and private funds over a decade. 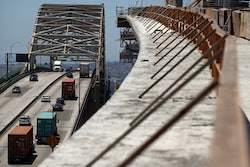