Purchase for Mothballed Plant Gets Extension

Franklin Haney is trying to be the first individual in the world to own a nuclear power plant.

CHATTANOOGA, Tenn. (AP) — The businessman trying to buy a mothballed nuclear power plant from Tennessee Valley Authority has been given an extension to complete the $111 million purchase.

The Chattanooga Times Free Press reports Franklin Haney signed an agreement on Nov. 14, 2016, that gave the former real estate developer two years to complete the purchase of the unfinished Bellefonte Nuclear Power Plant in Alabama. TVA has now extended the deadline to Nov. 30.

Haney made a $22 million down payment on the unfinished plant and says he has the other $89 million. But Haney says legal and regulatory issues are pushing back the completion of the deal.

Haney is trying to be the first individual in the world to own a nuclear power plant through his Nuclear Development LLC.

TVA began building Bellefonte in 1974 but suspended construction in 1988 when the demand for power slowed and the cost of completing the reactors increased. Anti-nuclear groups question whether a plant that has been under construction, mothballed and even partially dismantled over the past 44 years can still be finished at all.

Haney says he is confident in the project.

"We've been working day and night on this project for two years because it has such a great potential for thousands of jobs in the Valley and power that could be generated for an attractive price," Haney said. "We have been working well with TVA and we appreciate their willingness to extend this for a few more days."

Haney said he has personally funded much of the project so far. That includes more than $30 million to TVA to maintain Bellefonte while the purchase is pending and to engineering firms and consultants studying how the two Babcock Wilcox reactors could be completed. 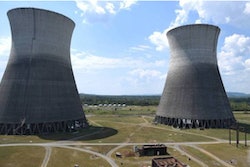