He submitted the winning $111 million purchase offer in a 2016 auction and was scheduled to close the sale Friday.

CHATTANOOGA, TENN. (AP) — A developer trying to buy an unfinished nuclear power plant in Alabama has sued the Tennessee Valley Authority, accusing the federal utility of illegally blocking the sale.

Attorneys for developer Franklin L. Haney accused TVA on Friday of breach of contract for not completing a previously agreed to sale of the Bellefonte nuclear plant in Hollywood, Alabama, to Haney's Nuclear Development LLC, the Chattanooga Times Free Press reported. Haney submitted the winning $111 million purchase offer in a 2016 auction and was scheduled to close the sale Friday.

TVA said the sale could not be completed because Haney had not gained approval from the U.S. Nuclear Regulatory Commission to transfer the construction permits for Bellefonte from TVA.

In explaining why TVA scrapped the sale of its Bellefonte plant to Haney, TVA spokesman Jim Hopson said: "The Atomic Energy Act requires that the ownership of a nuclear facility be under the licensing of the Nuclear Regulatory Commission and that (license transfer) is required for us to complete the purchase agreement."

But in the lawsuit filed in U.S. District Court in Huntsville, Alabama, Haney's attorneys argued that TVA's application of the Atomic Energy Act to the Bellefonte sale "is erroneous."

"The transfer of the Bellefonte site and its improvements in their current condition to Nuclear Development does not violate the NRC permits, the NRC regulations or the Atomic Energy Act," said Caine O'Rear III, an attorney in Mobile, Alabama, who filed the lawsuit Friday on behalf of Haney. "Moreover, the transfer of the NRC permits is not a prerequisite to closing under the contract."

O'Rear is asking the court to order TVA to sell Bellefonte to Haney's Nuclear Development under the previously agreed to contract. Haney is also seeking a preliminary injunction to ensure that TVA maintains the nuclear facility and its construction permit until the sale is completed.

The lawsuit said Haney's Nuclear Development has already paid TVA a $22.2 million down payment for the Bellefonte purchase along with more than $7.1 million for continued maintenance of the plant over the past two years. Haney said he has also spent more than $30 million on engineering, consulting and regulatory fees toward analyzing and developing plans to finish Bellefonte.

Haney is trying to buy and finish the Bellefonte nuclear plant, which he estimates he could do in five years at a cost of about $7 billion. That would provide cheaper power in the region and, during construction, generate 8,000 to 10,000 jobs in Northeast Alabama where Bellefonte is located, Haney said.

If his purchase of Bellefonte does not go through, Haney is asking for TVA to pay damages of more than $60 million.

Hopson said Friday that the federal utility had not yet been served with Haney's lawsuit, but he said TVA has operated in accordance with its legal requirements for disposing of surplus assets.

Hopson said TVA will move soon to sell Bellefonte and could find another buyer. Haney's lawsuit is seeking an injunction against TVA taking such action. 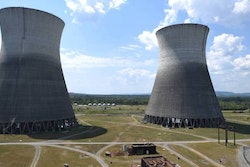