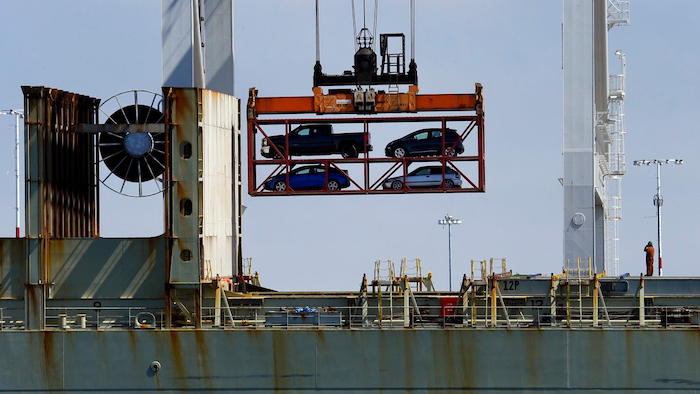 In this July 13, 2017, file photo, a crane transporting vehicles operates on a container ship at the Port of Oakland, in Oakland, Calif. Vehicle sales are slowing down despite a run on big SUVs. Major automakers said Tuesday, Oct. 2, 2018, that U.S. sales fell 7 percent in September and 4 percent for the June-through-September quarter, compared with the same periods last year.
AP Photo/Ben Margot, File, File

Vehicle sales are slowing down despite a run on big SUVs.

Weaker numbers for September and the third quarter wiped out a 1.8 percent gain during the first half of the year, and left auto sales on pace with 2017. Some analysts had cautioned that the first-half gains were driven by incentives and low-margin sales to fleet buyers like rental car companies.

Industry officials blamed the recent weakness partly on hurricanes — in both 2017 and 2018.

Ford sales analyst Erich Merkle suggested that the September numbers were hurt by Hurricane Florence, which flooded parts of the Carolinas. That made it tougher to compete with September 2017, when sales were boosted by owners replacing cars after Hurricane Harvey hit Houston, he said.

Edmunds analyst Jeremy Acevedo also noted that while prices and interest rates for auto buyers are rising, favorable credit deals are getting harder to find.

General Motors Co.'s chief economist, Elaine Buckberg, predicted 2018 will be the fourth-straight year with industry sales above 17 million vehicles. She said a new trade agreement among the U.S., Mexico and Canada will ease uncertainty for the auto industry, and consumer confidence remains high because of the strong job market.

Confidence might explain why more consumers are gravitating toward SUVs and trucks despite having to spend more for gasoline to keep them running.

Ford said September sales of Lincoln Navigators — a tiny fraction of the company's sales — soared 77 percent, and they stayed on dealer lots for an average of just 12 days. At General Motors, a 12 percent gain in combined sales of the Chevrolet Tahoe and Suburban and GMC Yukon large SUVs helped push the company's average transaction price up by $700.

Meanwhile, Ford reported that sales of cars plunged 25.7 percent in September, compared with a 9.9 percent drop for pickups and a 2.7 percent dip for SUVs.

Jack Hollis, general manager of the Toyota division in North America, said on a call with reporters that the industrywide ratio of truck and SUV sales to car sales is nearing 70-30, adding that he is "not so sure that it's stopping quite yet."

While industry officials expressed optimism in the economy, automakers have other concerns.

New U.S. tariffs on imported steel and aluminum could increase their costs. A new trade deal also could make vehicles more expensive by raising the amount of content required from North America to avoid duties, and requiring that at least 40 percent of a car's content be built where workers earn $16 an hour.

Here is how major automakers fared at U.S. sales in the third quarter, according to Edmunds, which provides content, including automotive tips and reviews, for distribution by The Associated Press: