The work will result in more than 100 jobs at the Intel plant in Rio Rancho.

RIO RANCHO, N.M. (AP) — Intel Corp. is moving development of a new generation of storage and memory technology to its manufacturing plant in New Mexico.

Gov. Susana Martinez made the announcement Monday, saying the work will result in more than 100 jobs at the Intel plant in Rio Rancho.

Intel and Micron Technology in 2015 announced the development of 3D XPoint, a new class of storage and memory technology billed as faster and non-volatile. The two companies decided to dissolve their partnership this year, meaning Intel will be working independently on its plans for the technology.

Plant manager Katie Prouty says Intel has a broad portfolio of products that are based on the technology.

Since establishing operations in New Mexico in 1980, Intel says it has invested more than $15 billion to develop its high-tech manufacturing capacity in the state.

Chinese-U.S. relations have plunged to their lowest level in decades.
Oct 26th, 2020 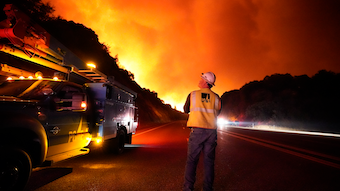 Forecasts called for a return of bone-dry, gusty weather that could fuel wildfires.
Oct 26th, 2020

They are expected to emphasize development of semiconductors and other technology.
Oct 26th, 2020

The decision comes less than two weeks before voters will be asked to exempt the ride-hailing giants from the state's gig economy law.
Oct 23rd, 2020

The damaged vessel, loaded with 1.3 million barrels of oil, tilted to the side after taking on water.
Oct 23rd, 2020

The four largest U.S. airlines have lost at least $10 billion in each of the last two quarters.
Oct 23rd, 2020
Follow Us
Most Recent