IL to Use $108M VW Settlement to Replace Engines

CHICAGO (AP) — Illinois will use a $108 million settlement with Volkswagen over the company's cheating on emissions tests to improve air quality, mostly by replacing old diesel engines with more environmentally friendly options.

Transit agencies, cities, schools and businesses may submit ideas to the Illinois EPA to receive money from the program. The first round of grants will provide $20 million to commuter rail and public transit bus projects in the Chicago area.

The U.S. EPA and Volkswagen reached a series of settlements in 2016 and 2017 to resolve U.S. complaints. The complaints alleged Volkswagen sold nearly 600,000 diesel-engine automobiles from 2009 to 2016 with computer software that cheated federal emissions tests. 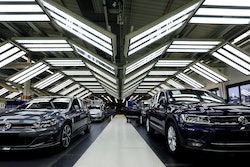