Efforts to build the nation’s first 'advanced small modular reactor' are on track. 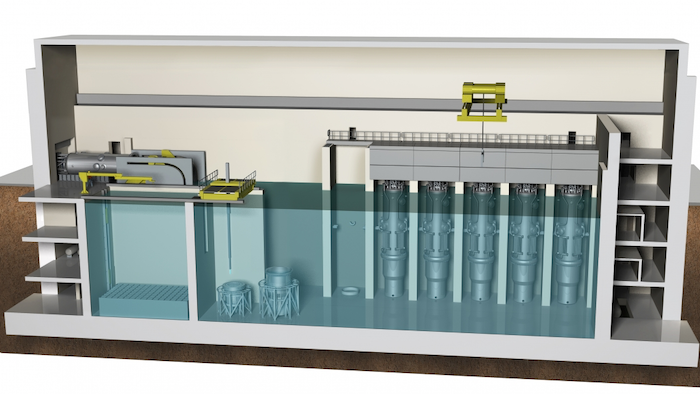 Until now, generating nuclear power has required massive facilities surrounded by acres of buildings, electrical infrastructure, roads, parking lots and more. The nuclear industry is trying to change that picture – by going small.

Efforts to build the nation’s first “advanced small modular reactor,” or SMR, in Idaho, are on track for it to become operational by the mid-2020s. The project took a crucial step forward when the company behind it, NuScale, secured an important security certificationfrom the Nuclear Regulatory Commission.

But the first ones could be generating power by 2020 in China, Argentina and Russia, according to the International Atomic Energy Agency.

The debate continues over whether this technology is worth pursuing, but the nuclear industry isn’t waiting for a verdict. Nor, as an energy scholar, do I think it should. This new generation of smaller and more technologically advanced reactors offer many advantages, including an assembly-line approach to production, vastly reduced meltdown risks and greater flexibility in terms of where they can be located, among others.

How Small is Small?

Most small modular reactors now in the works range between 50 megawatts – roughly enough power for 60,000 modern U.S. homes – and 200 megawatts. And there are designs for even smaller “mini” or “micro-reactors” that generate as few as 4 megawatts.

In contrast, full-sized nuclear reactors built today will generate about 1,000-1,600 megawatts of electricity, although many built before 1990, including over half the 99 reactors now operating in the U.S., are smaller than this.

But small nuclear reactors aren’t actually new. India has the most, with 18 reactors with capacity ranging between 90 and 220 megawatts, which were built between 1981 and 2011.

The U.S., Russia, China, India, France and the U.K. operate hundreds of nuclear submarines and aircraft carriers. Russia has dozens of nuclear-powered icebreakers cruising around the Arctic, and its first floating nuclear power plant has been completed and will be deployed in 2019 near the town of Pevek in East Siberia.

The Siberian plant will replace four 12-megawatt reactors the Soviets built in the 1970s to power a remote town and administrative center, as well as mining and oil drilling operations.

Even though the reactors will be small, they may operate at much bigger power plants with multiple reactors. NuScale, for example, wants to install 12 reactors at its initial Idaho site. Based on the company’s latest projections, it will have a total capacity of 720 megawatts.

Private and state-owned companies are seeking to build these small power plants in about a dozen countries so far, including the U.S. and the U.K.

France, which gets three-quarters of its electricity from nuclear energy, and Canada may soon join the fray.

This global interest in small modular reactors comes as more standard nuclear reactors are being decommissioned than are under construction.

Proponents of these advanced small modular reactors say they will be easier to build and more flexible in terms of where they can be located than the larger kind. The word “modular” refers to how they will be built in factory-like settings, ready for hauling either fully assembled or in easily connected parts by truck, rail or sea.

Small modular reactors will differ from the smaller reactors already deployed because of their new technologies. These advances are intended to make it less likely or even impossible for them to melt down or explode, as happened during Japan’s Fukushima disaster.

The power plants where these small reactors will be located will have added protections against sabotage and the theft of radioactive material. For example, they may be equipped with cooling systems that continue working even if no operators are present and all electric power is lost. In many cases, the entire reactor and steam-generating equipment will be below ground to safeguard these facilities during natural disasters like the earthquake and tsunamis that led three Fukushima Daiichi reactors to melt down.

Like renewable energy, nuclear power emits no carbon. And compared to wind and solar power, which are intermittent sources, or hydropower, which is affected by seasonal changes and droughts, it operates all the time and has a much smaller footprint.

As a result, small modular reactors could be paired with renewable sources as a substitute for coal-fired or natural gas plants. Yet they will probably have to compete with advanced energy storage systems for that market.

Whether these advantages materialize, obviously, remains to be seen once these reactors are deployed. Some experts are skeptical of the industry’s promises and expectations.

Although small modular reactors are designed to produce less radioactive waste than standard, bigger reactors for the same amount of power, the issue of where to safely dispose of nuclear waste remains unresolved.

Small modular reactors face other challenges, some of their own making.

Strong interest in the potential global market has led many companies to propose their own individual reactor designs. In my opinion, there are already too many versions out there. Before long, a shakeout will occur.

And, especially in the U.S., there is currently no clarity regarding the length of time required for licensing new reactor designs lacking any commercial track record – creating a lot of regulatory uncertainty.

It’s also unclear what small modular reactor-generated power will cost. That will probably remain the case for at least the next 10 to 15 years, until a few designs are actually built and operating.

Some experts foresee small modular reactors penciling out at levels that could be higher than for full-sized reactors which generally cost more to build and operate than other options, like natural gas, for the same amount of power. NuScale, however, predicts that its SMRs will be more competitive than that in terms of their cost.

And some observers fear that reactor owners might cut corners to reduce costs, compromising safety or security.

Although their costs are unclear and their advantages relative to other energy choices remain unproven, I believe these small reactors, as non-carbon sources, are needed to help resolve the energy challenges of our time. And the rest of the world seems ready to give them a try with or without the U.S.