The company will add 50,000 square-feet to make multi-ton radars for Navy ships. 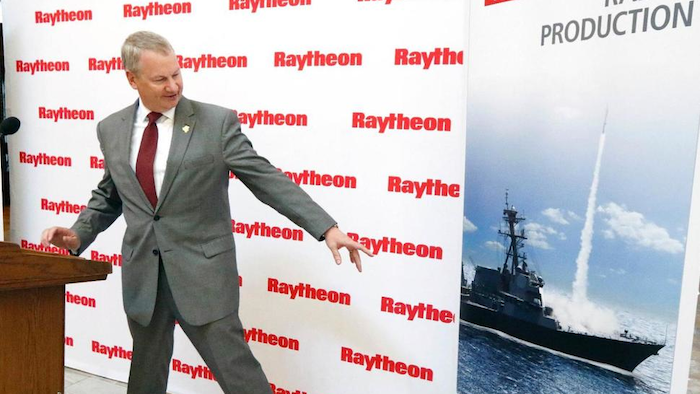 Wes Kramer, president of Raytheon's Integrated Defense Systems business, points to the radar housing on a U.S. Navy war ship poster, Thursday, May 31, 2018, and says his company plans to invest $100 million in its Forest, Miss., plant, to test and make military radars, during a news conference at the Capitol in Jackson, Miss. In addition, Raytheon will construct a new 50,000-square-foot facility to serve as the hub for testing, integration and production of s-band radars, including the U.S. Navy's next -generation SPY-6, Air and Missile Defense Radar program.
AP Photo/Rogelio V. Solis

JACKSON, Miss. (AP) — A defense contractor announced Thursday that it will invest $100 million at its Mississippi plant to expand its ability to make and test military radars.

Raytheon Co. of Waltham, Massachusetts, said it will expand its 660-worker facility in the Mississippi town of Forest. The plan calls for adding a 50,000 square-foot (4,600 square-meter) building to help accommodate a contract to make multi-ton radars for Navy ships.

Wes Kramer, who leads the Raytheon division that makes military radars, said the capital-intensive facility would give Raytheon the ability to test small and large radars alike.

"That's the consolidation we're looking for and the economies of scale we get on that," Kramer said. "It's really about us growing on the capability we already have in Forest."

The Navy has already paid Raytheon more than $500 million to design, engineer and begin producing SPY-6 radars to protect ships from airplanes and missiles. Kramer said the radars will go on all new Navy destroyers, and he expects versions of the radar to go on future aircraft carriers and amphibious ships. He said assembly of the multi-ton radars would be heavily automated.

"This is the high-tech type of industry we're looking for in Mississippi." There's no more higher tech that manufacturing these radar systems."

The state is giving Raytheon $3 million to prepare the site and upgrade infrastructure, plus $1 million to train workers.

Craft says Raytheon also qualifies for incentives that will rebate some worker income taxes to the company. Those incentives require Raytheon to pay new workers at least $34,275 annually. Raytheon could get more than $400,000 in rebates over 10 years.

Scott County will provide a tax break cutting property taxes by two thirds. Newt Ishee, executive director of the Mid-Mississippi Development District, said he was unable Thursday to estimate its value, but it could be worth millions.

Raytheon said the Forest complex will continue to make other kinds of radars and electronic warfare components.

Construction will begin in August, with completion expected in early 2020.