Musk was criticized for cutting off two analysts who asked about the electric vehicle and solar panel company's cash needs and orders for its Model 3. 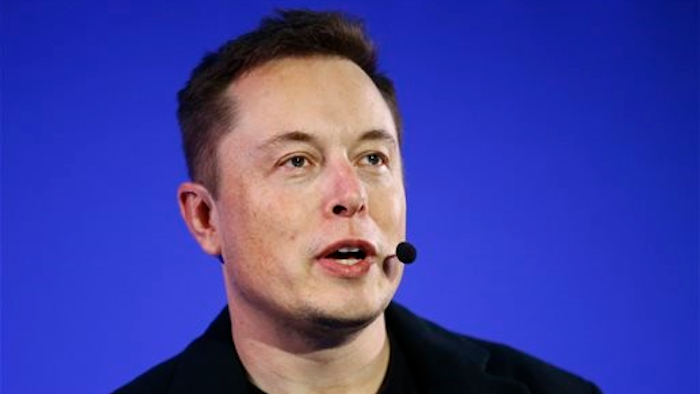 NEW YORK (AP) — Tesla CEO Elon Musk is going on the defensive Friday in a series of tweets, saying the people he shut down during a contentious conference call were analysts who believe investors could profit by betting that the company's stock price will fall.

Musk came under scrutiny after the conference call to discuss Tesla's quarterly earnings Wednesday went awry. Musk was criticized for cutting off two analysts who asked about the electric vehicle and solar panel company's cash needs and orders for its Model 3. Musk called the questions "dry" and "not cool," but later said there was more to his complaints than boredom.

On Twitter he said the questions came from "analysts who represent a short seller thesis, not investors." That is, he felt the analysts who questioned him were either betting against Tesla's stock, a claim he didn't present evidence for, or were only thinking about the short term while other investors want Tesla to succeed.

Musk, who owns nearly 20 percent of Tesla, also told his 21.6 million Twitter followers that investors bet against Tesla more than any other company, and vowed to prove them wrong.

In dollar terms, investors have bet more against Tesla than any other U.S. company. Thanks to Tesla's success on the stock market, the value of the bet against it is currently about $10.9 billion, according to FactSet, a financial data provider.

But it's not as if Wall Street or most analysts think Tesla is going to fail. FactSet says about 23 percent of Tesla shares are shorted, meaning the owners of those shares are betting the price will fall. That's relatively high for a company of Tesla's size. Companies with large percentages of short interest tend to be either small, risky investments, like biotech drug developers, or companies that have suffered years of struggles, like furniture rental company Rent-A-Center.

Tesla doesn't fit into either category. Investors see it as innovative and many believe it has enormous promise for growth, but it has consistently lost money and has a lot of debt, and it hasn't proved it has mastered the complicated task of manufacturing large numbers of cars.

Jack Ablin, chief investment officer for Cresset Wealth Advisors, said Musk agreed to subject Tesla to that kind of scrutiny when he took the company public, and while he and other CEOs surely find that frustrating at times, they have to find a balance between satisfying investors in the present and sticking to their goals in the years to come. He said he didn't find fault with Musk or the analysts.

"If you're an investor or an analyst you want to know all the details and have the details laid out for you every quarter," he said. "And if you're a visionary, you have a 10-year plan and you don't want to keep explaining yourself."

He added that the tiff might push some companies to stay private for longer so they don't have to deal with those compromises.

Ultimately most investors are still expecting a massive payoff from the company. Since pricing at $17 a share in its initial public offering in mid-2010, Tesla's stock soared as high as $385 last year before the company's manufacturing problems knocked it lower. It's now trading at $296.

The conference call Wednesday night came just after Tesla announced a record first-quarter loss. The quarterly performance, coupled with the conference call, sent Tesla's stock down 5.6 percent Thursday. It recovered most of that loss Friday as the shares rose 4.1 percent.