Many factories say they're having a tough time getting supplies in order to meet demand. 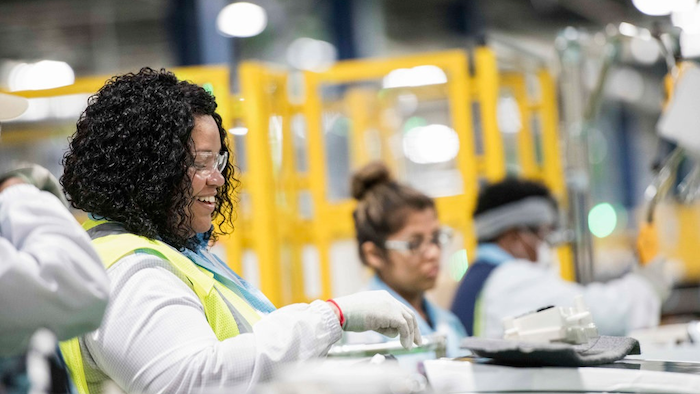 In this March 16, 2018, photo, Elbony Jeter works on the factory floor at the Samsung washing machine facility, in Newberry, S.C. The South Korean manufacturer moved into the former Caterpillar facility location in 2017. On Monday, April 2, 2018, The Institute for Supply Management, a trade group of purchasing managers, issues its index of manufacturing activity for March.
AP Photo/Sean Rayford

WASHINGTON (AP) — U.S. manufacturers say they expanded at a slower pace in March, with many factories saying they're having a tough time getting supplies in order to meet demand from customers.

The Institute for Supply Management, a trade group of purchasing managers, reported Monday that its manufacturing index slipped to 59.3 last month from February's reading of 60.8, which had been the highest since 2004. Any score above 50 signals growth.

"The details of the March data point to the steady growth in the factory sector seen over the past several quarters being sustained," said Richard Moody, the chief economist at Regions Financial.

The categories of new orders, production and employment each fell in March for manufacturers, even though the underlying numbers remained positive. But companies surveyed for the index highlighted another issue: a shortage of raw materials that is causing them to lose out on possible sales.

Multiple companies also said that the introduction of steel and aluminum tariffs by President Donald Trump was causing concerns about rising prices. Some companies bought up the metals ahead of their implementation, driving up costs. Trump is trying to support U.S. steel and aluminum mills, though his tariffs include exemptions for allies such as Canada and Mexico.

Any supply shortage and price increases could further worsen as Trump is imposing up to $50 billion worth of tariffs on Chinese imports in response to concerns about Beijing stealing foreign companies' technology or forcing these firms to share their innovations in order to have access to Chinese customers. China responded Monday to the tariffs by announcing $3 billion of additional tariffs on U.S. pork, apples and other products.